​
Character Biography --​
​
Spoiled billionaire Oliver Queen came home with an entirely different personality--and a newfound purpose in life. Completely self-absorbed and never caring for anything but himself, Queen was on an leisurely sailing trip when his assistant betrayed him. Leaving him for dead on a desolate remote island. Stranded, he survived by, amongst other things mastering a bow and arrow. Read More >​
​
This is a general discussion thread -- So please, discuss, theorize, hypothesize here!​

Premium Supporter
He looks like a MK ninja in this game, he basically looks like how I wanted MK9 reptile to look, instead of the stupid ass lizard thing we keep getting.
K

He looks dope as hell. I can't wait to give him a go.

I called him as my main months ago when this game was announced. I will be the true green one.

looks beast, probably gonna be someone i use, i like zoners

Grolarbears said:
I called him as my main months ago when this game was announced. I will be the true green one.

Cyborg is lame compared to Green Arrow, get on my level.

BTK HY3NA said:
Cyborg is lame compared to Green Arrow, get on my level.
Click to expand...

I wonder what his gimmick button will do.
Rapid fire arrow-moves for a short time could be cool.

The Bat in the Hat

In terms of move set and playstyle he basically sounds like Hawkeye from UMvC3 (no Gimlet though, but I guess that would be too sick). I'll definitely be giving him a try.

BTW if anyone unfamiliar with UMvC3 wants an example of Hawkeye to get an idea of what Green Arrow is probably gonna be like just do a youtube search for BT IFC Yipes or Combofiend. Both have very good Hawkeyes. Chris G had a good one too until he started playing Morrigan.

Premium Supporter
My main for certain. 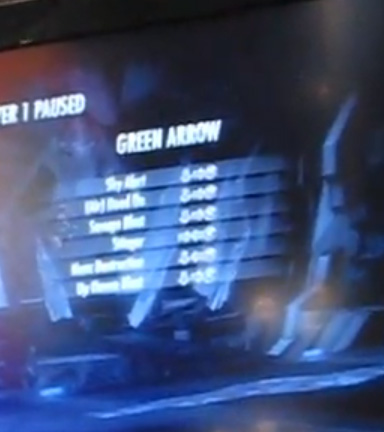 Looks like his moves are almost all down toward or down back motions which is perfect for zoning. I'm betting the -> <- is the input for his slide. So far I think this character looks great. He has some nice combos off of jump ins, can air juggle with projectiles, his front and back dash are great, and he can fire both straight up or down in a jump. Plus once he cocks an arrow he can still aim forward, crouch, jump, walk, or aim it at an angle to be horrible to people wanting in. Not certain if slide is a good get out of dodge on jump ins, but it looks like a low that can go under some stuff.

Best thing is his hyper move looks like it creates a HUGE hitbox and its a delayed explosion on whif that can still confirm. On hit you initiate it and on whif if they drop their guard or it goes off before they can block it then it hits from the look of the new Superman vs GA vid. This means aim can be lenient on confirming it in the middle of combos so no difficult frame links if you end up too far out or something to fully hit confirm.

Freeze arrow looks to be the A-hole move of the set though. Cock it, load it, and start crouching, jumping and aiming. The ability to shoot someone out of the air into the slide is an idea I want to explore combo potential with.

So excited for this character.

Looks like a solid secondary that will cover Nightwing's bad MUs. Lol since MUs dont even exist yet

Premium Supporter
The more footage I see of GA, the more I think he will be my main!

I've been watching his show and it's pretty interesting.

This will most likely not be my main since I like fast characters and don't like to Zone overall. (I still rushdown Jax.. lol.)

That said, he looks pretty kool. I look forward to messing with him and all the other characters when the game komes out.

Premium Supporter
Green Arrow's Dash is super fast if that helps sell him to you at all. I dig zoning, but I can easily see getting some interesting stuff off of stunning folk with the ice arrow with this guy so I see him as a hybrid zoner/sub zero style dude to use and if I'm right I will be super happy. My backup though is still likely The Flash even though I want to hold out hope Grundy finds a way to be fun since I dig chain grappling.

No clue what to expect from the roster newcomers though since Joker, Lex, Green Lantern, Doomsday, Bane and more still don't have gameplay vids yet.

BTK HY3NA said:
There is no doubt in my mind that Green Arrow will be Injustice's ideal zoner; the Freddy Krueger of this game.
Click to expand...

I'm thinking the same thing. Freddy ended up being my main in MK9, so I'm definitely interested in any IGAU character that could work as his spiritual successor.

anyone else really looking forward to the battle arena this Friday? I think the reason why I'm looking forward to it out of all of these is because everyone placed the stamp on GA as possibly being the best zoner in the game when he was revealed. Can't wait to see some how well he plays and what kind of dirty tricks he has up to his sleeve.

Premium Supporter
Green Arrow should win this one in the popular vote IMO. TV show has a lot of clout and popular culture dictates everything.

Anyhow I expect we'll see at least one combo get an extra hit at the end by sliding full screen to catch them as they land out of some juggle that got extended via arrows and that we will see some meter burn arrow tricks from GA as well.

I honestly hope his bow spin has a meter burn cancel to make it safe, but if not a dashing version would be sick. His smart bet is likely not to try and jump and shoot Hawkgirl and to simply use triple arrow volley and angled shots to ground her air approaches and then try for either electric or ice. This is a spectacle fight though so I doubt we'll see smart footsies and it'll mainly be showing combos which is fine by me.

Can combo from his super like KL can from his X-Ray on MK9, and better, whoever used him combo his super into stage transition. GODLIKE

I'm going to body everyone who picks this asshole.

You're lucky there aren't babalities, fgts.

Premium Supporter
HEY! Thats MR. Fgt to you and just remember Green Arrow will always be Mr. Fgt's favorite asshole to play with!
...
waitaminute...that sounded cooler in my head. Seems off when I actually say it.

Could we start over? Quick insult me so I can say something clever and twirl my fgt mustache!

You inspire no fear.

Loved the little teabag at 1:42 (Yes, I know he was changing arrows.) He doesn't stand a chance next round though, stupid fan voting !

Picked him as my main months ago. I'll only be using his Arrow skin though, not too fond of this one.

Eddy Wang said:
Can combo from his super like KL can from his X-Ray on MK9, and better, whoever used him combo his super into stage transition. GODLIKE

Shit is about to get ignorant.

apparently GA has another super

green arrow is od. Think hawkeye in marvel lol. His charged arrows, especially the ice one can be used as fuzzy guard setups.
Click to expand...

he also has a unblockable super as well for those capcom style resets which everyone loves lol
Click to expand...

edit:LOL i'm (soap bar in my mouth)... i thought i read unlockable. carry on.

Premium Supporter
Yeah the unblockable super has been known for awhile. Its one of the best FU tools I can think of considering if I time it right when a guy falls down I can essentially setup an unblockable explosion on top of him he couldn't escape with anything. Its also awesome if you think of how sometimes a hazard near someone could be restricing their ONLY escape route from this tool. Shoot hazards, setoff space controlling issues, shoot unblockable, smile.