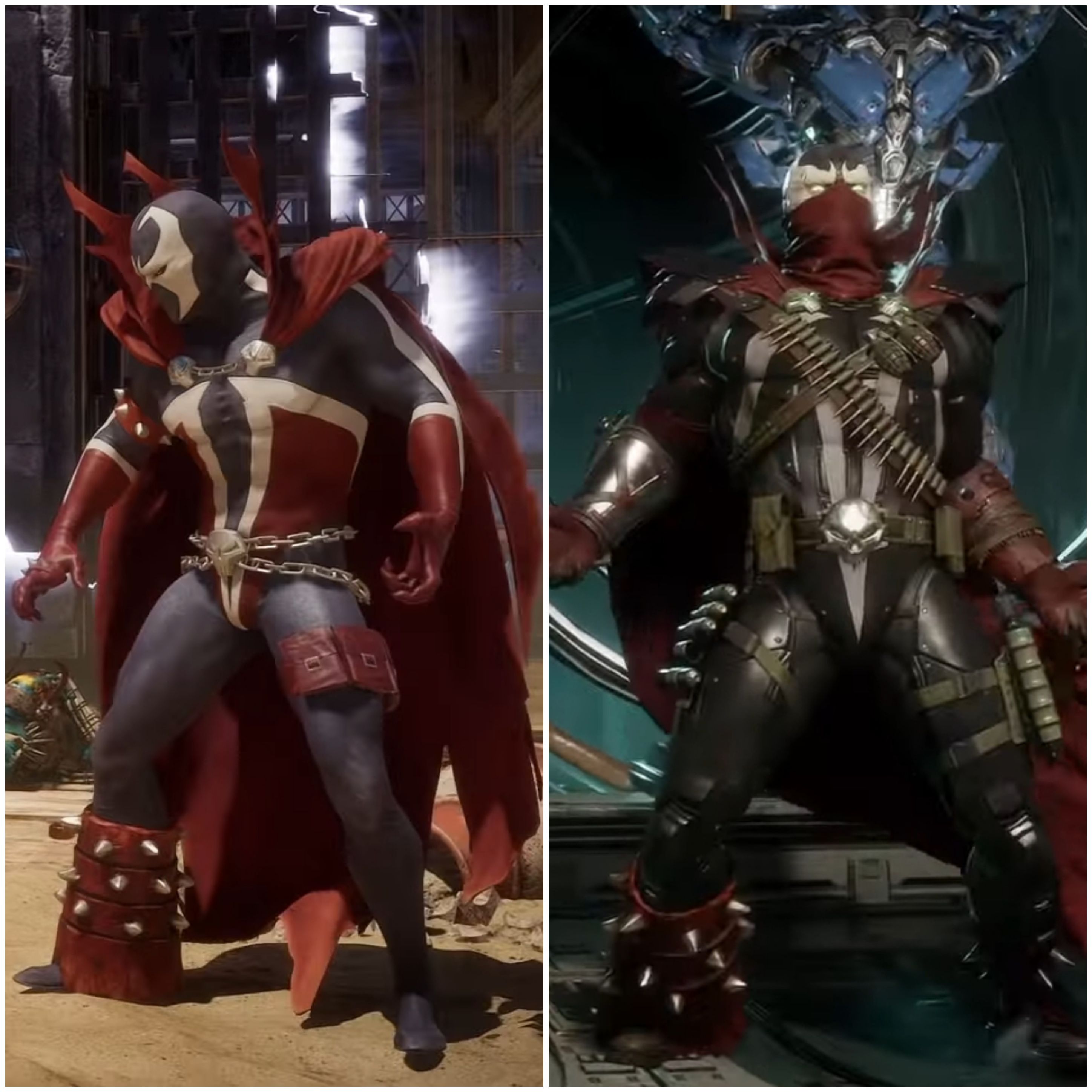 MKF30 said:
Keith would be great at ASMR, I find it more relaxing yet commanding rather than intimidating. Now JEJ voice is intimidating lol. But I see why people like his voice for Spawn.

That's a cool intro with the cape though.
Click to expand...

the carzy loud people are NO WHERE near As terrifying as the quiet one.

Ck AeroVoid said:
the carzy loud people are NO WHERE near As terrifying as the quiet one.
Click to expand...

Yeah but that can apply to anyone, in terms of voices I mean. Lol Like in school, back in HS I never bothered anyone, just did my work and went home. One day this kid I knew he got bullied then one day snapped and made a hit list, regular voice did his work etc but threatened to bomb the school so they transferred him. Now they had a few threats last year the place was swarmed by cop cars. It's crazy how times have changed. Think they had one cop. Are when they took him in.

But I mean in terms of voice actors lol. I think James earl Jones has a much more scarier voice than Keith David imo lol. I also have voice acted myself so that's the VA in me opinion.

fluffybunbunkittens said:
Love the smoothness of the animations and the voice, am a bit worried about how lolrandom everything is. There doesn't seem to be a theme, it's just 'Spawn summons whatever oh and also turns invisible'.
Click to expand...

But Spawn can turn invisible in the comics as well. It's not something he uses often, but his suit can do that. He's one of those characters that almost has too many powers to keep track of. But anyways, while it might seem random, invisibility makes decent sense.
March 17th is so far away! Spawn is actually going to make me play this game again. He just looks too cool and like too much fun not to use.

JPGalvatron said:
But Spawn can turn invisible in the comics as well. It's not something he uses often, but his suit can do that. He's one of those characters that almost has too many powers to keep track of. But anyways, while it might seem random, invisibility makes decent sense.
Click to expand...

Spawn doesn't actually have a "powers" in the traditional sense. It is one of the reason that he is so unusual. He can basically do anything the writer wants. Turn into mist, sure, turn into a cupcake.. if he wants. Grow horns, form machine gun out of his arms.. it doesn't matter.

Basically Spawn has creative freedom to do whatever even from "continuity". Whatever the story needs he can do. They even tried to explain this once in a surreal book early in the series. Basically a fuck you to major comics.. It boils down to this.

Basically Spawn is "everything", he is all comics. I think it is issue 8 or something under 10 though, really early... but there is one level of the afterlife called Erebus. This is basically a conduit where comic creators stand bound and gagged being tortured by the sounds of their own creations being slowly twisted and warped in front of them behind these bars, their hands cuffed behind their backs. This warping of the heroes extracts a power that is pulled out of them to form a endless tapestry. Spawns power is siphoned from that conduit from all the heroes in all comics, a tiny portion of the whole but still basically an infinite amount. Siphoned is the wrong word, given to him by the heroes is more like it. The entire soul machine is focused by "The One who Came First" (Superman) like a lenz. This "power" fuels everything in the Spawn universe. 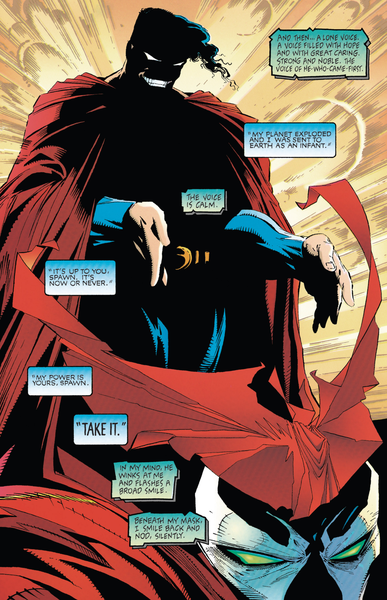 God I forgot how goofy Spawn was

DixieFlatline78 said:
God I forgot how goofy Spawn was
Click to expand...

It is actually not that unusual. DC has the Source Wall for example (the pages of the comic you are reading that surrounds the DC multiverse where all objects get trapped and the "God Wave" emanates at the moment of a new creation in the DCMultiuniverse, the moment you... the reader think of something and spawn a new universe to add to the multiverse).

Before comics got obsessed with "realism" and narrative they were much more abstract places, and we were all better off for it.
I stopped reading Spawn around issue 18, way back in the day, but from what I remember, yes, Spawn's power was basically "reality manipulation" and he could do anything he wanted, but he had a limited amount of energy to use, and the more powerful the feat, the more energy he used up. Once his energy was depleted, he would be forced to return to hell to become a servant of Malebolgia. I think they eventually did away with the limited energy flaw, which is pretty dumb because that basically makes Spawn omnipotent, but oh well.
Well, what a stupid bit of comic lore that is. Doesn't change the fact that a character suffers if they have no theme or identity, especially a fighting game character.

Closest thing Spawn has is being the distillation of all the edginess of the 90s comics (though not enough pockets), like being a demon with guns would be a good enough hook, but it's the invisibility that throws it all off. No different from him summoning a Cadillac and driving around in it for the rest of the match 'because technically he could do that, oh wow how meta' .
Last edited: Mar 11, 2020
Imma be that guy and say I dont like his animations...
His animations based off the trailer looked very un-impactful and stiffer than usual. I find it far more noticeable when he does that spinning cape hit. Adding screen shake to a move doesnt instantly give it impact. His animations feel "too smooth" and dont have any snap to them like some other characters have. His dive kick was a straight joke with how dumb it looks.

On another note, he looks pretty good model wise but he feels a bit pastic-y, kinda like an action figure which is fine if thats what they were going for. Gameplay wise he looks fine and his chains look somewhat interesting and have that snap and impact that his body animations dont have. His FB looks....interesting.
Definitely agreed on his moves looking too 'soft' when they should convey impact. Using his cape for his most prominent strings (like the 13f mid into overhead launcher) seems like a bad idea, since it never slams into the opponent, it just gently strokes them.

I hate that his optimal combo ender seems to be the 'strip them naked' move. It feels Shang Tsung-y, not Spawn-y. And it does absurd levels of damage... Which v3 doesn't get, and as a result its damage levels seem to be low (only getting an awkward overhead/low mixup out of it).
Last edited: Mar 11, 2020

fluffybunbunkittens said:
I hate that his optimal combo ender seems to be the 'strip them naked' move. It feels Shang Tsung-y, not Spawn-y. And it does absurd levels of damage... Which v3 doesn't get
Click to expand...

the "burn" restand or amp+combo ender with the crazy damage is not in any variations, it is a base string.. so all variations have access to it.

Jynks said:
the "burn" restand or amp+combo ender with the crazy damage is not in any variations, it is a base string.. so all variations have access to it.
Click to expand...

fluffybunbunkittens said:
Well, what a stupid bit of comic lore that is.
Click to expand...

I guess, I love this kind of stuff, but as I said it is not uncommon... Already talked about the "source" in DC comics and in Marvel you have "The Crunch" and "The Rip".

Basically the "Crunch" is just another type of "Source Wall" that symbolises the Marvel Universe coming into contact with the minds of the readers. The Kryn built these massive machines there to harness the power radiating into the Marvel Universe and it is this power that is the cosmic forces. Which in turn power beings like Galactic and Silver Surfer all the way down to the Hulk. Outside the Crunch before "reality" starts there is the Negitive zone, a kind of masestorm of collective thought, imagination, that passes through the crunch to be crystallised in new characters, locations and stories. The by product of this is a massive amount of energy is the comics forces of the Marvel