Now that the KL Seasons are being reset, if the OP could be updated with the missing KL season rewards, that would be great!

Here are some screens for Seasons 12 and 13:

I don't have any screens for Season 5, but here were the rewards for that season:


This thread will help in regards to what we can expect for the rewards being swapped around, so thank you! 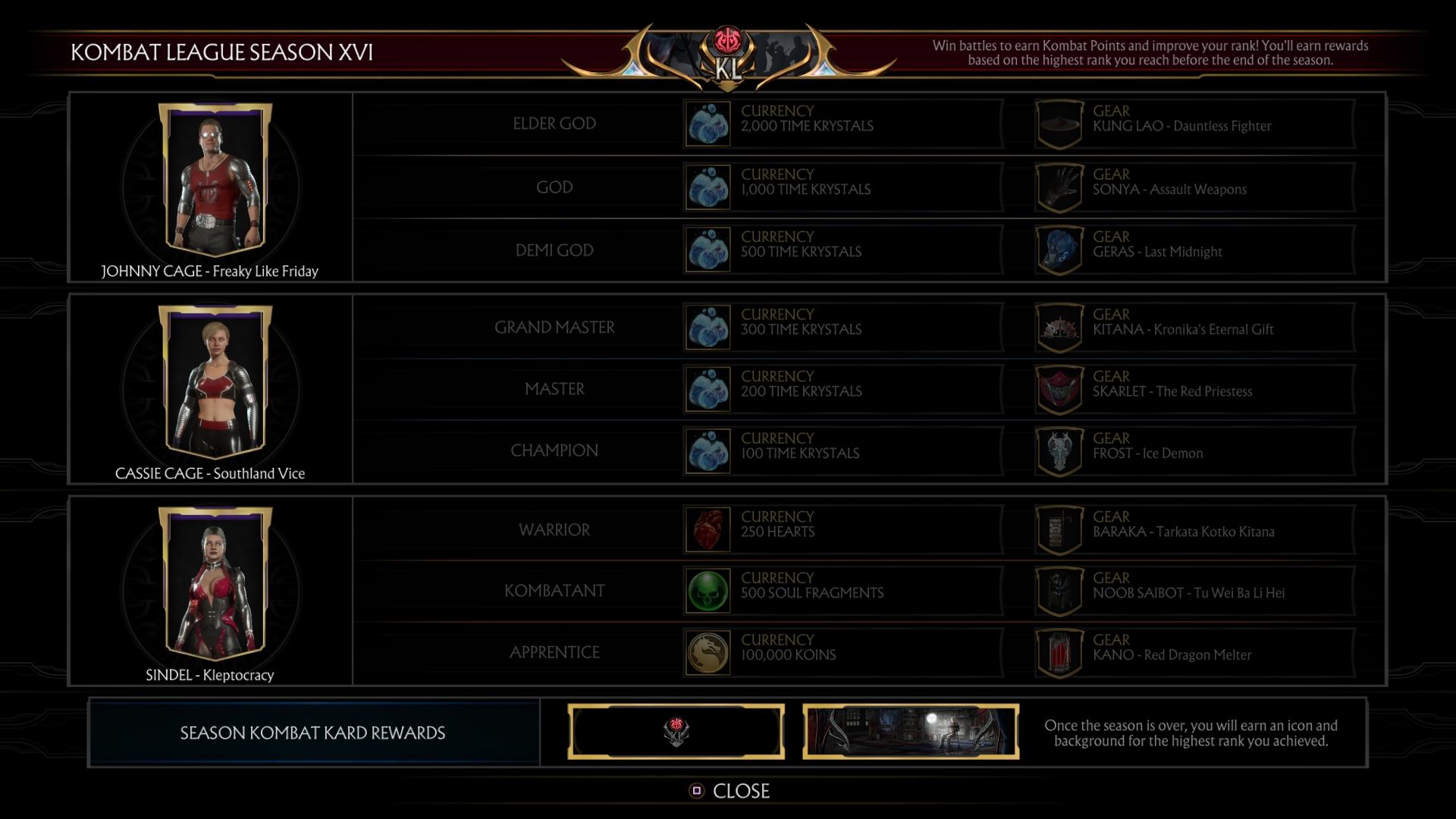 So that's where the new Skarlet mask was hiding.

Looks like a bunch of ??? Gear we saw in the Aftermath update was being saved for later KLs
Z

holy shit are we really in season 16

I see there's a whole bunch of new gear pieces with the new Kombat League Season XVII (they don't show up on the gear list yet for closer inspection sadly), even though it's Season of Blood again for the skins.

Take note of D'vorah ovipositors at Elder God. Not because of their looks (they'll be impossible to match with anything anyway) but just that as their chosen placement.

fluffybunbunkittens said:
Take note of D'vorah ovipositors at Elder God. Not because of their looks (they'll be impossible to match with anything anyway) but just that as their chosen placement.
Click to expand...

Ovipositors are literally one of the most bottom of the barrel rewards along with both her own bugs and wings (I think she literally has the crappest gear to unlock), as well as Kollector satchels, Geras sand batteries, Frost power arrays, Shang scrolls and Jacqui gauntlets. Stick a popular ninja's mask up there NRS and you'll get people craving it, but why would any of us care about D'Vorah's revolting spider legs that'll probably clash in colour to the skin anyway?

Are the brutalities in this season new? Or are they repeats. Yet to see shangs fireball one show up.

WhooFlungPoo said:
Are the brutalities in this season new? Or are they repeats. Yet to see shangs fireball one show up.
Click to expand...

Yes. Rambo gets a meh brutality for his log move that no-one uses, while Fujin gets a terrible brutality (throw people at the screen, but without any special effects like Raiden gets, so it just feels out of place).

At last, the reward for reaching Warrior rank in the new KL season....

mirandas said:
Having the right numbers makes it easier to determine what kind of company to create a call capture system around. The best b2b sales companies understand that the size of a company's call center doesn't necessarily reflect the kind of business they serve https://belkins.io/appointment-setting. While large call centers often handle calls about finance and accounting issues, smaller companies may prefer to talk more about the services that they offer. In this case, it is often helpful to look for companies that offer customized b2b sales solutions based on the type of business a particular company serves.
Click to expand...

what in the actual hell does this have to do with anything....

smoke420 said:
what in the actual hell does this have to do with anything....
Click to expand...

its called spam and there is a report button for it...

Wow the new (reissued) KL Season of Death I think has literally THE worst rewards I've ever seen thus far.

Not only are the skins in my opinion the absolute worst in the game (I've avoided claiming them even in the meteor tower - I don't like revenants regardless, but they didn't even bother to give them unique evil armoured revenant clothing like Liu Kang, Kitana etc. all received) but it's also probably the most awful selection of utterly inconsequential items to unlock. The Scorpion mask is passable, although it's still just a palette swap (it's just his MK4 one again now in silver) but pretty much everything else is junk (a Frost Power Array, a Kabal gas canister, a Geras knuckle duster, another Lone Ranger hat for Erron, a Jacqui Shield Battery, D'Vorah wings... ugh.

Oh well, at least I don't have to waste much time or stress on this season, think I'll just go for the brutalities on the daily rewards and I suppose pick up a few daily rewards that are unavoidably collected on the way.
You must log in or register to reply here.
Share:
Facebook Twitter Google+ Reddit Pinterest Tumblr WhatsApp Email Link
Menu
Log in
Register