Cool to spew some ideas, though please keep it realistic. So which 3 stage fatalities you want?

2. Koliseum - Crowd gives thumbs down, then kicked onto spike on pilar OR overrun by horse OR thrown into Pen - guts and bones spew out

3. Beast Pen - fed to the beasts, torn apart as a dog or dragon tear from each side until you split in half.

War Kamp: Torn Apart by the other Tarkatans and Thrown On The Meat Wagon
Kytinn Hive: Taken away by one of the hideous Outworld Spiders
Sea of Blood: We heard about the passing Leviathan from Geras, Let's see it.
Shaolin Trap Dungeon: Recreation of the MK4 Fatality into those blades

Also want an Uppercut Brutality for the DeadPool where they die the classic MK2 way.

Spiders in Kytinn Hive and dinosaur on the Kronika stage.

I'm honestly happy with anything we get, and feel arenas like the Shaolin Trap Dungeon are incomplete without them since they're so obviously expected given the franchise's history.

I do have to say though, I hope they'll be organically integrated like a brutality rather than an FMV sequence like fatalities are nowadays. Whilst it was AWESOME when MK2 first did the first "FMV death sequence" with the top-down Pit II stage fatality, that's solely due to it being so unique, special and technologically impressive for the time.

I want stage fatalities to once again feel a natural part of the fight, unlike MKX's FMV-esque stage fatalities. It'll be far more visceral and enjoyable if the fight never loses its camera perspective when you throw them into the hideous fate that the arena offers, rather than essentially loading a video of what happens next. Especially if it means that they can be knocked into a different part of the background for different effect, like if you had a pit like MKX where they hit spikes on the way down, well I want to see what happens if they fall from the far right of the screen be different than if they fall in the middle or far left, where they hit different things along the way because it's actually the in-game character model naturally hitting the scenery around it, not a pre-made sequence.

Brutalities for the most part (aside from a few awful ones), for me are a hundred times more satisfying, visceral, painful, and of course 'brutal', than the over stylised fatalities that the game plays like a movie sequence. The franchise sometimes forgets that the more subtle the violence, the more painful it is to watch. Just watch a movie like Bone Tomahawk to see to how the most simple acts of ultra violence can be so unpleasant to watch, rather than ridiculous things that result in lightsaber arms (Raiden), turning into a giant panther (Kotal), making body parts explode repeatedly (Jacqui), or nunchucking every body part until it explodes into fire (Liu Kang).

Give me Skarlet's disembowelling throw brutality over either of her fatalities any day, it's just so raw and realistically represented that it feels a hundred times more horrific to watch. Why can't Kano just sink his knife into an opponents stomach and slowly slice them open hearing them scream in agony as their innards burst out, rather than a ridiculous bottle neck dance scene?I hope the stage fatalities will have a similar impact, I prefer to see the fighters on-screen murder each other with pure simplistic violence over hyper-stylised finishing moves that are so ridiculous they just play for laughs.

Give me Quan Chi's MK4 leg-beat and MK9 Noob's wishbone over Sonya's helicopter nonsense any day. So needless to say, I'd love classic stage-fatalities return, where a swift uppercut or unexpected roundhouse launches them into the background with swift effect rather than an overblown animated sequence to play. 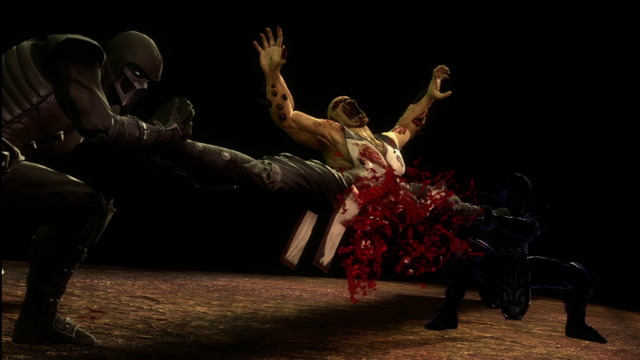 That's why I like the Kove Brutality more than the (still good) Stage Fatality.

I am the most excited to see the Kytinn Hive stage fatality. They can really do awesome stuff with it.

Sonya's fatalities in both MKX and MK11 are so lame. I know she always had a military theme, but to rely so much on fucking drones and all? Where is the Scissor Split?

1. Fed to the spider on Kytinn hive

3. Geras comes out of the red sea and pulls you in with him