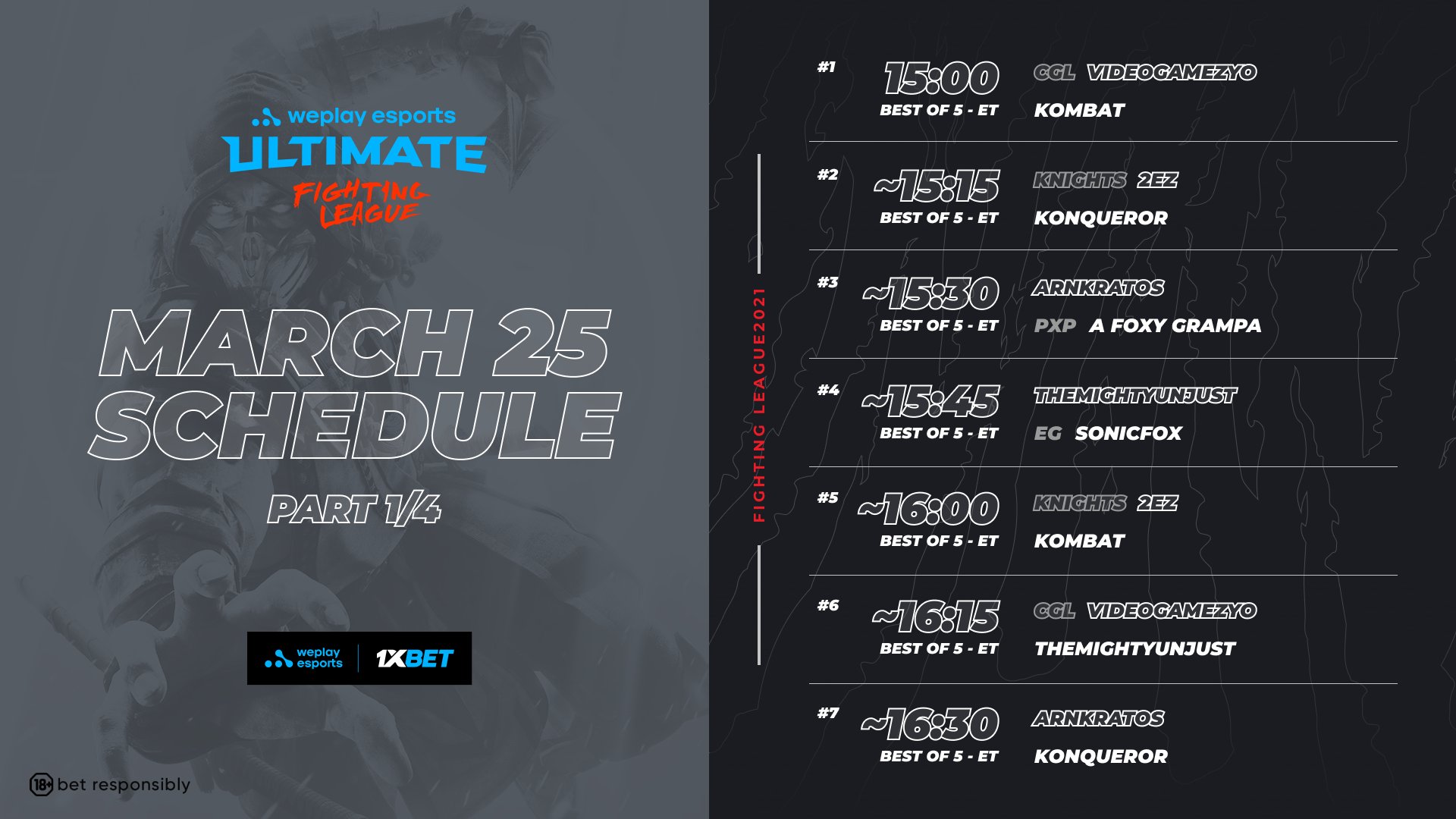 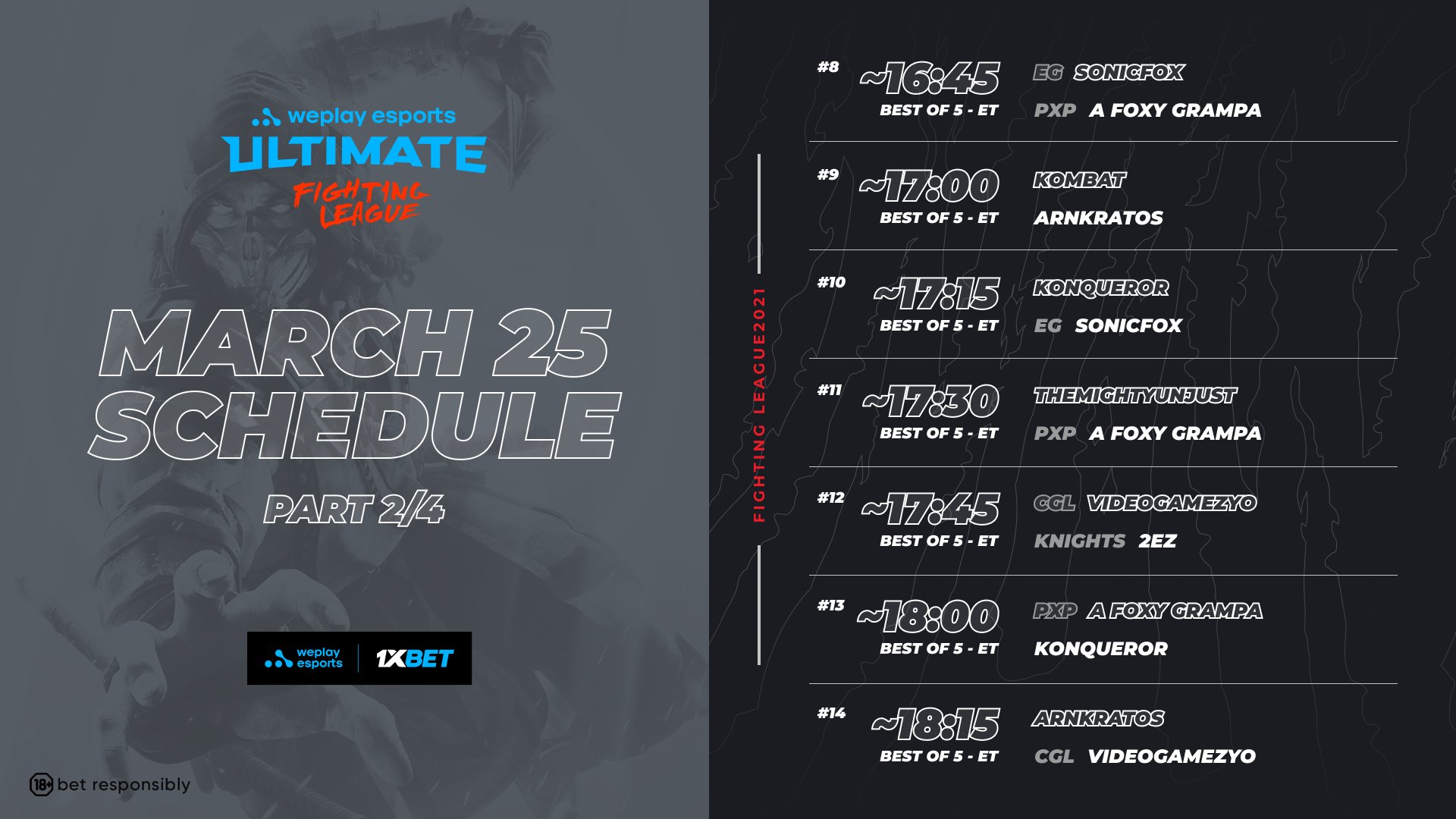 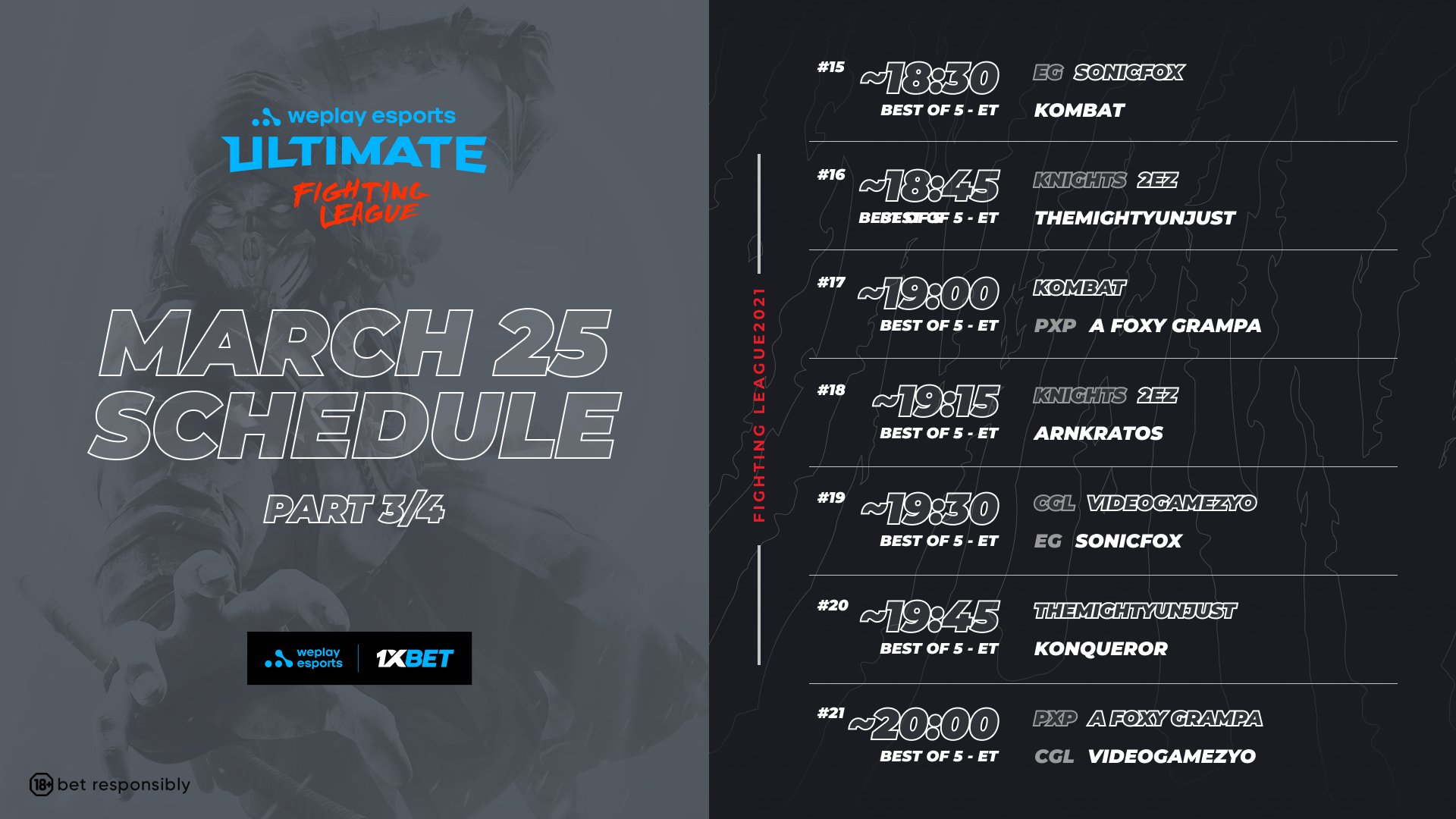 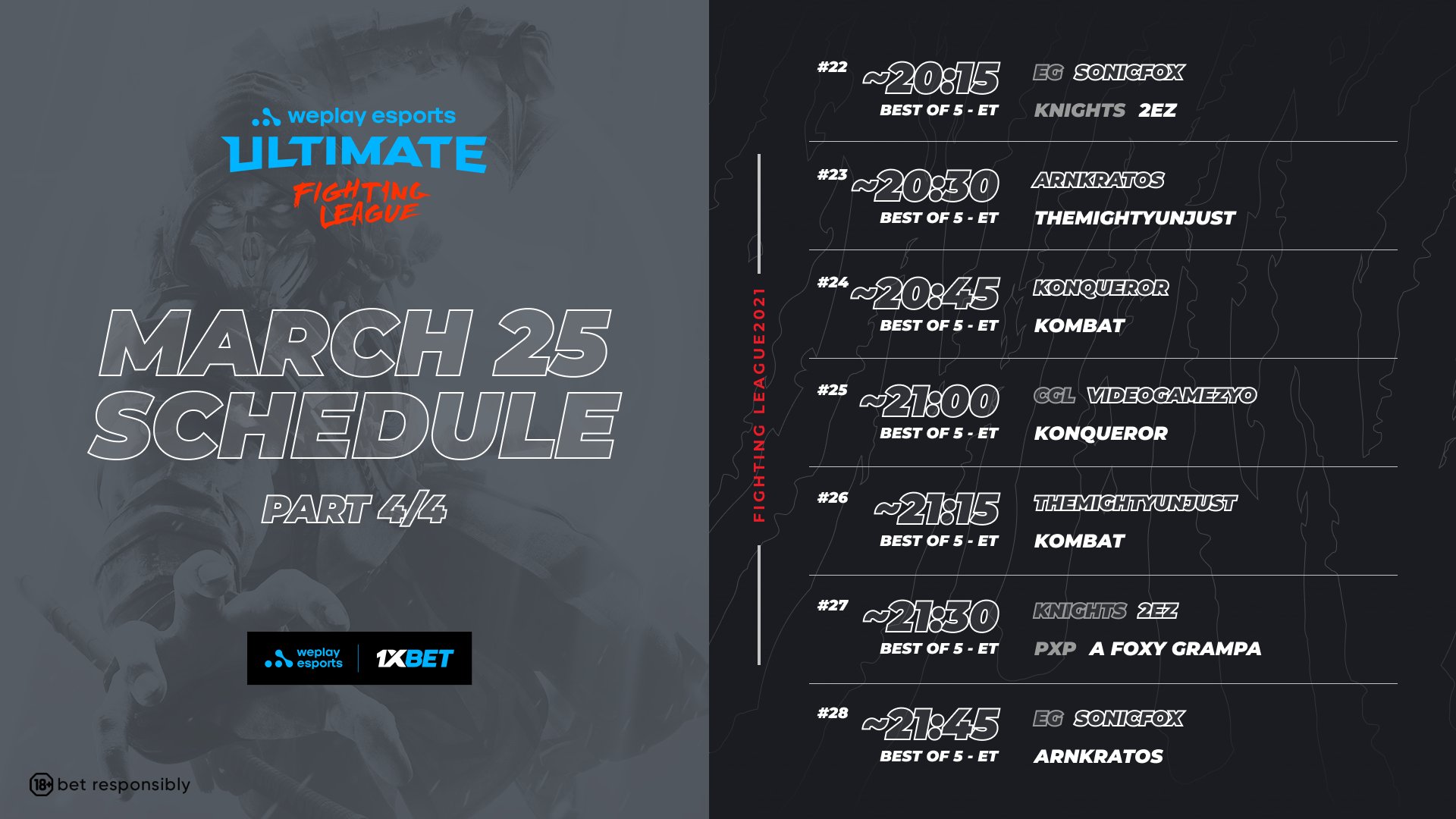 WePlay Ultimate Fighting League Season One is about to begin and its opening lineup for Mortal Kombat 11 is absolutely stacked, featuring many of the biggest names to ever hit the sticks.

From reigning Final Kombat Champion Dominique “SonicFox” McLean to the beastcoast boys Matthew “Biohazard” Commandeur and Ryan “Dragon” Walker, the competition is going to be brutal.


Running from March 25 to 28, fans will see these top players compete in-person at the WePlay Esports Arena Kyiv, many for the first time since last March at Final Kombat 2020. This will kick off the first season of WUFL, which will host a different fighting game tournament for three straight weekends, starting with MK11.

Here is the full lineup of kombatants for the inaugural season.


You can watch all of the WUFL action on the competition’s official Twitch channel starting on March 25, with a full tournament format and schedule being released soon.


https://twitter.com/i/web/status/1374848662971547648
Should be hype but sadly I have to work. Will have to catch it on demand. Sonic is gonna body folks.
Last tournament was fun.
Perhaps this tournament will also be fun.
I'm hoping Arn Kratos really, really messes up some people's predictions. I genuinely love it when people from other regions get to compete on even footing with NA. The same goes for Konqueror, TM, and Azerbaijan, but they're more known quantities at this point. I think Arn Kratos has been to an offline major once a long time and made top 8. I don't know who he plays now, but his Shang Tsung looked on par with Foxy's at the time.
Last event was great, not the least because of Foxy stomping over everyone with Sheeva...

Rooting for him and ArnKratos to make things interesting.
It's currently LIVE w/ Preshow
Ist match starts in 1 hour


https:// www.twitch.tv/ WePlayUFL
Who do you guys have in GF?
I really think I could be Tekken Master and Rewind.
But I hope that HoneyBee and Kombat can make it far.
Sonic is a clear favorite but has Sonic been playing MK?
Also, I think the field has caught up to SonicFox. While the top players are top players for a reason, the winner really depends on who's "ON" that day IMO.

StormGoddess said:
Who do you guys have in GF?
Click to expand...

I want Sonic vs Foxy but it will probably be Dragon instead of Foxy. I hope Biohazard does well too. Top 4 at least.

StormGoddess said:
But I hope that HoneyBee
Click to expand...

Zviko said:
I want Sonic vs Foxy but it will probably be Dragon instead of Foxy. I hope Biohazard does well too. Top 4 at least.

LOL, you're right, wishfully thinking about Honeybee. I like his D'Vorah.
I just wondered why they brought back repeat players from the 1st tournament. No offense to those returning but today's Mk11 era has a strong base of players to select from. Regardless it will be great matches.
I am truly interested in how strong mighty unjust is offline, similar to Avirk last tournament.
I wondered the same thing about online players like Koisy and Titanium tigerzz.
Shame this is likely the busiest week of the year to me so far. I might only be able to catch a bit on sunday.

Good luck everyone.
Btw -- just a note to everyone that we're going to be discussing results here.. So if you're going to be watching later on, bookmark the stream and don't read through the thread! Or at least, don't read below this point

It's ShowTime folks....
Official WUFL Stream Link
wow, the production is crazy...
AMAZING!
that sheeva t-shirt...LOL
They spent a lot of rubles on this. Many, many rubles.
How is VGY teching every throw?
forward, backward, FB cancel into throw- he techs them all

StormGoddess said:
How is VGY teching every throw?
forward, backward, FB cancel into throw- he techs them all
Click to expand...

He had a few good guesses, but he's been thrown 2-3x in the last couple rounds.

StormGoddess said:
Who do you guys have in GF?
I really think I could be Tekken Master and Rewind.
But I hope that HoneyBee and Kombat can make it far.
Sonic is a clear favorite but has Sonic been playing MK?
Also, I think the field has caught up to SonicFox. While the top players are top players for a reason, the winner really depends on who's "ON" that day IMO.
Click to expand...

I see Sonic playing on Dragon's stream fairly often, which is why I suspect he'll play D'vorah against Cetrion. He straight up drives Dragon crazy with her range.
other than raw damage - why chose Noob against Joker? Unjust has a Cetrion and Jacqui.
Is it for zoning?
eta-
this is becoming a sweatfest...
Arn Kratos vs Konquerror might be the match of the day. This is so close.
I predicted on the podcast that there would probably be some upsets, but.. I think Kombat not making Top 8 is pretty massive even by those standards.

I'm guessing he doesn't feel as sharp as he could be after not playing as much in the last year.. But you have to give credit to Konqueror and ArnKratos for playing really well today.
Feel like Foxy robbed Kombat. According to weplay table on their website, kombat and foxy both won 13 games (not sets or rounds, but single games) and kombat lost 11 and Foxy lost 13. Feels like Kombat should have gone through for losing less games.

However the only person I cared about winning was foxy so I'm glad. Once he's out I no longer care who wins.
I kinda feel bad for Kombat. It was looking so well for him and it looked like he didn't need to sweat at all. Then a loss to SonicFox completely ruined his momentum. I expected Sonic going 7-0, 2-5 for VGY however I did not. Only ArnKratos was convincing enough, everyone else's performance was average at best.
You must log in or register to reply here.
Share:
Facebook Twitter Google+ Reddit Pinterest Tumblr WhatsApp Email Link
Menu
Log in
Register