Here's the changes for the first public beta:

This revision focuses mainly on visual fixes but there are additional changes that make sense to the game.

Win count does not reset in 2 player mode unless machine is reset. Win count only resets when a 2nd player enters game during arcade ladder, game reset, or game over.

At the "Midway Presents" Screen, the bell toll sound clip has been changed.

On the character select screen, when another player presses start, the player entry sound clip has changed.

At the "Choose your destiny" screen, the response from Shao Kahn has changed for each. This is to address the lack of change from MK3.

Scorpion and Human Smoke's "Get Over/Come Here" sound clip is no longer cut off by blood spatter. This also causes special moves such as Kitana's Fan, Kung Lao's Hat, and Stryker's Riot Gun to no longer have blood spatter noise.

Fighters appear in front of Human Smoke/Noob Saibot select portraits in 1v1 now as well as 2v2, although cursor is still in front.

The Desert stage background layers have moved slightly right. On LCD monitors and MAME the stage sky area cuts off, and in the corner the sand dunes are broken. This corrects this issue. However this will not affect arcade cabinets as the edgres of the screen aren't seen.

P2 Sektor can now fire dumb missile while homing missile is out.
Sektor now has his own ghost palette during Kabal's Mask removal fatality (previously shared with robot smoke)

No longer stage locked to Noob's Dorfen. Can now be finished.

Babality palette fixed. Now matches fighter palette.
Has sparks during FINISH HIM! That Cyrax and Sektor previously only had.

All male ninjas now have their own ghost palette for Kabal's Mask removal fatality. Previously all used Scorpion's ghost palette.

All female ninjas now have their own ghost palette for Kabal's Mask removal fatality. Previously all used Kitana's ghost palette.

Aside from bugs where player one could perform certain inputs that player two could not, no changes to gameplay have been made

I'm really sorry to ask this, but how do I play this? I've literally never played a game on PC but I'm dying to try this. Again, really sorry for such a dumb question. I'm assuming it's common knowledge. Just not familiar with what a .bin file is.

can you nerf the op chars?

ShaolinGunFu said:
can you nerf the op chars?
Click to expand...

This is not a balance hack.

I wanna get into this game but don't know how to install any of it.
G

Shaka said:
I wanna get into this game but don't know how to install any of it.
Click to expand...

Look up emulators on YouTube or Google, pretty straightforward, not sure bout how to apply patch tho

You have to download the roms that are in the link in the youtube video, then you have to take the .bin files out of there and copy them into the UMK3.ZIP file in your roms folder in mame.
G

tehdrewsus said:
You have to download the roms that are in the link in the youtube video, then you have to take the .bin files out of there and copy them into the UMK3.ZIP file in your roms folder in mame.
Click to expand...

So unzip the Rom and replace file then rezip?

Godbless fixing jax on 2nd player!!!! Can't believe this was never fixed on the original release of UMK or at least console HD versions!!!

G11OST said:
So unzip the Rom and replace file then rezip?
Click to expand...

Don't even have to unzip. Just drag the two files into the umk3.zip

Human Smoke and Noob on the select screen, you need Juggernaut's hack for that!

The Bell tower gets its bells back, and clouds over the moon!

Beta version 2 is on it's way very soon!

Meantime...
Wow, there's a lot going on here... how many different colors of blood do you see? 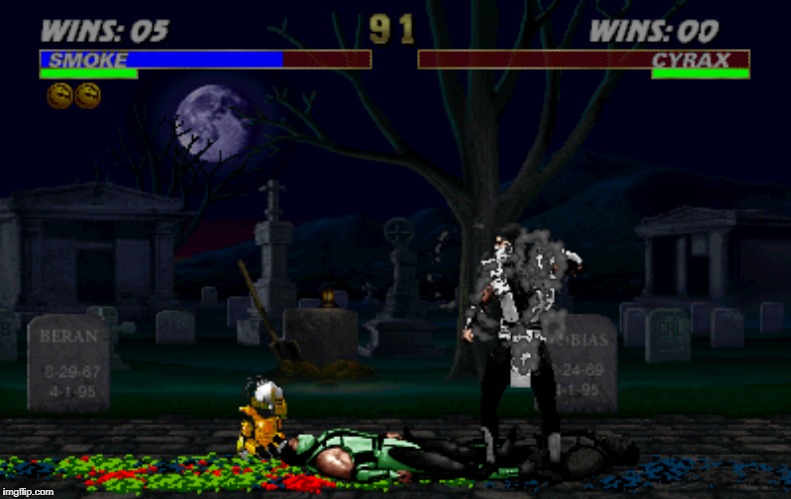