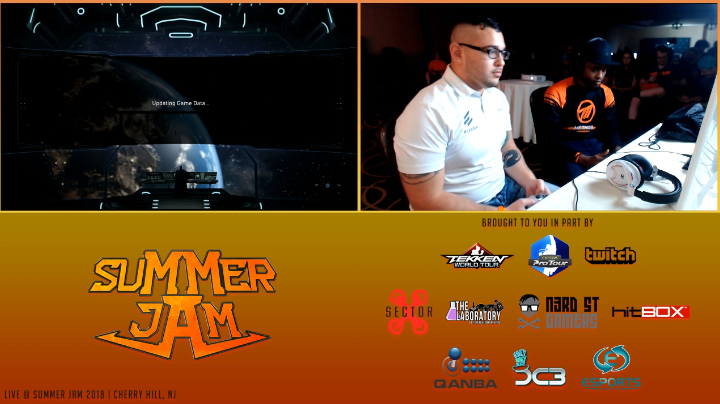 It's a NRS double hitter this weekend, with Summer Jam wrapping up on the same day War of the Gods is hosting their finale. TYM is here to make it a little easier on you guys who can't watch everything.


The Top 8 going into this:

As always, check out the spoiler below for the details. War of the Gods is going down at 6PM EST, so you've got a few hours. See y'all then! 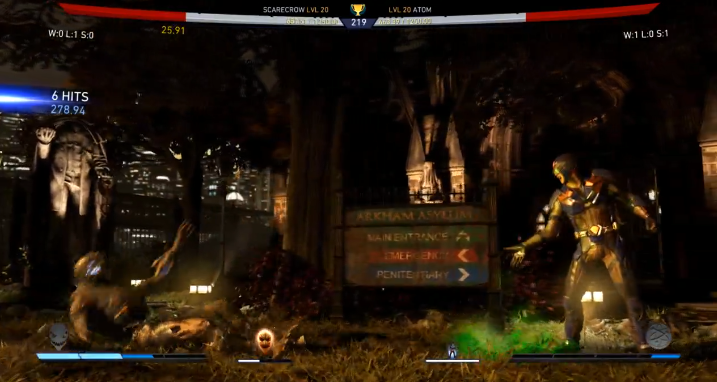 Getting us going was Grr vs. Triiclops. Going under the name "Garr" for the duration of this match, Grr took game 1, not looking bothered at all by the Atom vs. Scarecrow matchup. Triiclops put in some work game 2, but Grr made a great read with a MB projectile and put another game on the board. In a game that went down pixel to pixel, Triiclops finally got a win for himself. That would end up being the only win, Grr took the next game and won the set 3-1.

On the other side of Winner's SylverRye played Hellboy against Forever King's Batman. While I'm sure many of us wanted to see the Batman mirror, Sylverrye was looking like the IPS finalist he is with his Hellboy. SylverRye took game 1 with some magic pixel work and King swung back hard for game 2 and took the win after converting a full combo into a vortex off a stray poke. Sylverrye swung back harder for game 3, taking the next win without losing most of his health. Game 4 went to Sylverrye as well, winning the game after being on his last bit of health and taking the set 3-1.

Over to Loser's, we had Pulse playing Flash against Burninoni's Cheetah. Pulse dominated in game 1, mixing-up Burninoni in a blender that can process things that happen in an attosecond. He made some good adjustments in game 2, but Pulse was able to take the next game. Game 3 went down pretty much the same way, Pulse took the set 3-0, looking like the cleanest Flash since that time the Flash went to a bathhouse. 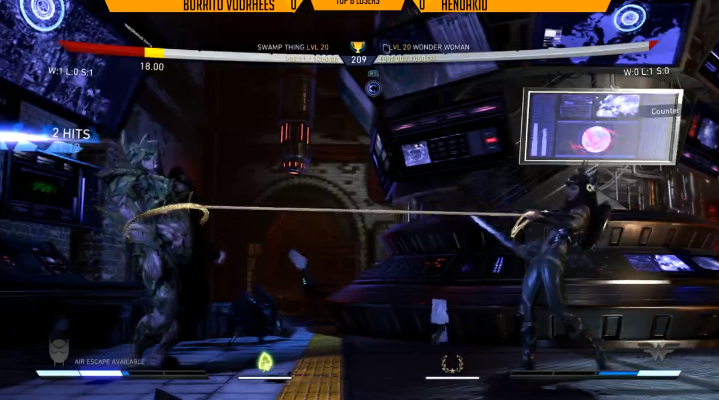 In the "you never see this matchup" matchup, was Burrito Voorhees' Swamp Thing fighting Hendakid's Wonder Woman. In another close game, Hendakid took the first round, keeping everyone asking "why does nobody play Wonder Woman?" in a strong showing. Burrito turned the tables and flipped them clear across the room, taking the next game without losing a healthbar. He kept his momentum going into the next game, great usage of Abigail's Garden preventing Hendakid from getting another win. Burrito won the next game, taking the set 3-1 and eliminating the only Wonder Woman in the tri-state area.

Next on deck was Triiclops and his Atrocitus against Pulse's Flash. Answering the age old question "can just being angry win you a fight against a fast guy?", Triiclops directed us towards a "yes" with a game 1 win. Only getting angrier as the set went on, Triiclops took the next game while his fans in the crowd cheered him on. In the angriest match of the set, Triiclops took the final game, winning the set 3-0.

Following them was the family kill, Forever King's Batman against Burrito Voorhees' Gorilla Grodd. Almost running away with the set with Grodd's insane vortex, Burrito put in some great work game 1, but wasn't able to close it out. The next game was super close, but a risky decision to not clash paid off for King, and he put himself up 2-0. Showing him no mercy, King went up game 3-0 and knocked his brother out of the tourney. 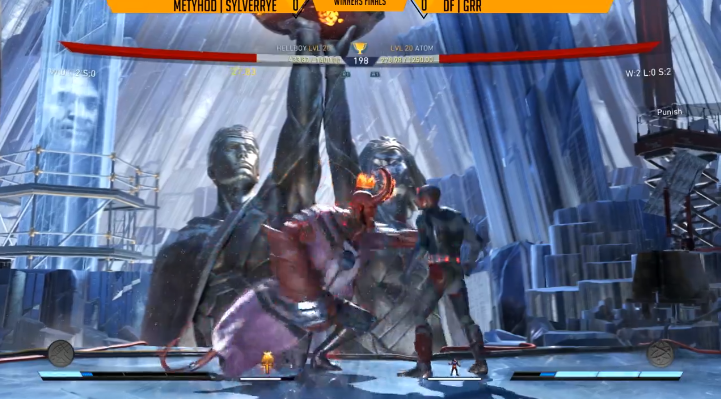 Next up we had Forever King playing Triiclops. In a super close game 1, Triiclops clutched out a win with his Atrocitus. King returned the favor for game 2, Batman's anger over his dead parents beating out Atrocitus' anger over everything else. After King took the next game, Triiclops swapped out Atrocitus for Starfire, upsetting his earlier fans in the process. Unfortunately, King seems to know this MU well, he won the set 3-1 and moved on to Loser's Finals.

Our next match was Grr against Forever King, both players looking to get the rematch against SylverRye. First game went to Grr, second game went to Grr; the man clearly wanted that runback. King wasn't making it easy for him, game 3 went down to the wire. Grr almost lost the game betting on a super, but smart placement of a green vial led to King WU sliding over a poison cloud, killing himself. Winning the set 3-0, Grr advanced on to Grand Finals. 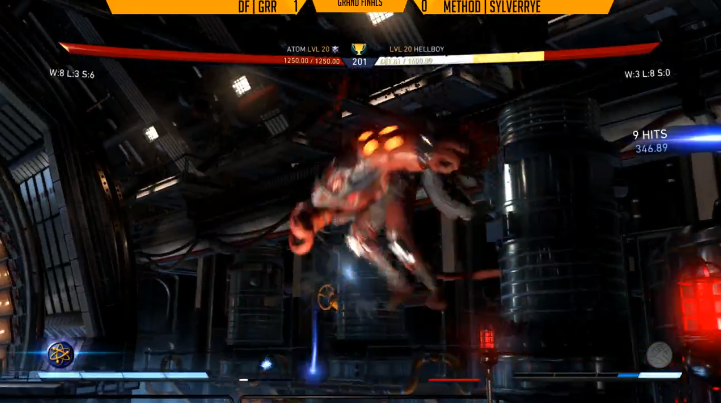 In another series of back and forth matches that come with players of this caliber, Grr and SylverRye met for some close games, Grr winning the first, SylverRye winning the second. Grr noticeably made some adjustments since their first set, Hellboy's trait no longer dominating the match like it once was. That got him the next win and SylverRye looking at the bad side of a bracket reset. SylverRye was not going to go easy, however, and he tied things up 2-2 and brought himself up to tournament point. Facing elimination in a game that wasn't going his way, Ultra Instinct Grr awoke and came back from a health deficit to reset the bracket 3-2.

Game 1 of the new set went down in the same fashion as the rest, Rye getting the first point on the board. Game 2 looked to be the part where Ultra Instinct ran out and Jiren went to work, Rye won game 2 without giving Grr much room to do anything. Rye kept his newfound momentum going, but Grr was able to bring things back with a game winning super. Looking much more alive, Grr took the next game with another super. 2-2, we were now at that part where everyone teamed up against Jiren to take him out. Grr did it alone, reverse 3-0ing SylverRye with a third game winning super and won the title of Summer Jam Champion.

Congratulations to everyone who made Top 8! Was cool to see some new faces mixed in with the vets. Next Big E event is NEC in December (I think), so you've got some time if you were looking to sign-up. Until then, see you guys at the next event.

News Editor
I cannot stress how dope it was that Grr reversed 3-0 Sylverrye with 3 game winning supers to win Summer Jam. One of the funniest things I've seen in a while

I wasn't able to make it out today or watch top 8 yet but I had a lot of fun yesterday even though I quickly drowned in pools. Was a really cool event with a lot of fun games setup and swag shops. Everyone nice and chill and I was able to get some really fun casuals in on top of my matches being good. I encourage people to go out to these events more often, even if you are just spectating, it's like a big ass arcade full of fighting games. Especially if you live close by like I did. Really bummed I didn't make it out for more then just Saturday, but it was a great time and I'm definitely coming back next year.

Where was this streamed and is there an archives?

Cashual said:
Where was this streamed and is there an archives?
Click to expand...

Lol never mind. It’s right above me. I was trying to avoid spoilers.

Thanks for not spoiling results.
P

All the tournaments/majors got the netherrealm stream. Man o man big e events got left in the esports dust.

PLAYING TO WIN said:
All the tournaments/majors got the netherrealm stream. Man o man big e events got left in the esports dust.
Click to expand...

Yeah, I did think that was a little messed up that Big E seemed to get the shaft this year. Least Summer Jam was still a CPT event

HellblazerHawkman said:
I cannot stress how dope it was that Grr reversed 3-0 Sylverrye with 3 game winning supers to win Summer Jam. One of the funniest things I've seen in a while
Click to expand...

Premium Supporter
Am I reading it right that there were 11 different characters used in top 8, with no repeats?

Royal Contributor
Awesomely done thread. No spoiler in title or even first post.. thanks for listening to us. Appreciate it really