I had a lot of fun doing Season 1-2 on my twitch channel and I want to get one more season of Online tournaments before MK11 gets here.

If you are familiar with how I ran my season 2 tournaments, then you already know the gist as it will be very similar to them. There will be a few minor changes but everything will mostly remain the same.

The biggest difference is there initially will not be a prize pool since I have no one sponsoring these event like I did in the past. I am accepting donations to make a prize pool, so anything can happen. Season 1 had an anonymous donor who was gracious enough to give us $300 to the top players, and season 2 was sponsored by Brass City who put up $400 for the prize pool. Anything is possible.

Tournaments will be played weekly, where players will kompete for points to try earn a spot in the Final Elite 8 tournament.

There is going to be 1 (one) Preseason tournament (Starting Saturday Jan 26th at 2pm ET / 11am PT) that will be just for fun, and will be good practice for the kompetitors as well as good practice for me running the tournaments. Plus it will give the viewers a look at what to expect throughout the season.

The regular season will start with the very next tournament. There will be 8 (eight) Regular Season tournaments where players will compete for points. You gain points based off of how well you do in these tournaments and they add up from tournament to tournament. My preference is to run tournaments weekly, however there is the possibility of skipping a weekend every now and again (Probably around once every 6 weeks or so) due to the nature of my job. I will let you all know what weeks tournaments won't happen as soon as I know. Me not being able to run tournaments for the most part is pretty random, but it's expected every now and again. I should be able to give you all at least a week heads up for these weeks.

I like to think of the placements as "tiers". Each "tier" will get 1 more point than the tier before it.

Here is the results of my Week 4 tournament in Season 1. This is how the points would be distributed in a 25 player tournament. 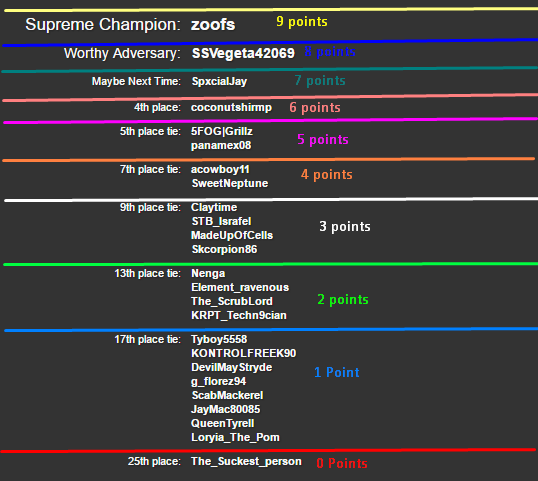 I hope this isn't confusing for people, if you have questions on the scoring please don't be afraid to ask.

Let's use me as an example here. In this tournament I tied for 9th place. I would get 3 points from this. HOWEVER. Let's say I didn't show up to my last match and I got DQ'd out of losers bracket. I would get -1 point for that. Making my total points earned for this tournament 2, instead of 3. Hopefully that makes sense to everyone.

I want people who fail to show up top their matches to punished in some way, and I feel like this is a good punishment without going overboard.

To participate you need to sign up for each tournament on it's challonge page. Each challonge registration page will be posted on my Discord Server https://discord.gg/0jPbY0HH6dSVEk1b as well as the rest of the tournament information everyone will need. If you type !register in my twitch channel while I'm live on twitch my chat bot will shoot you the link as well. Additionally, all tournament related information will be posted here throughout the season.

You also must send me a friend request on PS4 if you are not already my friend. My PSN username is "Skcorpion86". Please make sure your challonge username is the same or at least similar to your PSN name. If not... you MUST make sure I know or you will be DQ. I can't invite "MKX_Pro" to a match if his psn name is "Catz4lyfe" If your challonge name is different than your PSN it's not a big deal. Just make sure I know.

Double Elimination
Best 3/5 at all stages of the tournament
Winner of the match is variation locked, loser may change variation and or character
Any Stage
Anyone found changing variation on a win will forfeit the match (not the set)
If you win by default, you are NOT variation locked for the next match

When it is your turn to play on stream I (Skcorpion86) will invite you to the King of The Hill (KOTH) 3 times (I will send multiple invites in case one or two of them don't allow you to join) . Once you receive your invites you have 5 minutes to join the KOTH. If you do not show up within 5 minutes you will be Disqualified (DQ'd) There will be a 5 minute timer displayed on the stream to keep track of this.

Some Matches Will be played off stream to make the tournament run faster. If you have to play off the stream, I will let you know in the stream and will also send you and your opponent a PSN message telling you to play off stream and who to play with. Invite each other to a match and play with the same rules. When the match is over report your score to one of the mods or myself. Taking screenshots/pictures and videos of your matches to show "proof" that you won your set is encouraged. I don't want to see anyone get cheated out of a set, but if you don't have "proof" that your opponent is lying about the result or cheating then there really isn't anything I can do to change the outcome. Anyone found lying about their results or cheating will be permanently banned from these tournaments for the remainder of Season 3.

Anyone who has a ping of 300ms or higher for longer than 5 seconds in a match will automatically lose the set. Make sure to turn the ping counter on during matches to see if your opponent is lagging or not. This rule is to make sure no one gets lagged switched during off stream matches. (If you or your opponent is lagging on stream I will be able to tell just by looking at it) If your opponent is lagging really bad during an off stream match take a VIDEO (not a picture) of them lagging longer than 5 seconds and you will win your set automatically. If someone loses this way I will play them in a match to "see their connection for myself" If it is bad then the results of the set will be in the non laggy player's favor. If the laggy player is not laggy then the accuser (non laggy player) will be automatically lose the set.

If you are in the winners bracket and you get DQ'd, you are not eliminated from the tournament. You will be put in losers bracket where you will play your matches like normal.

Matches WILL be played in order: We will NOT bounce around the bracket out of order to fit the needs of ANYONE. If you can't show up at your designated time that is your own problem. We did this way too much for Season 1 and all it does it make the tournaments longer and confuse people.

If you cannot connect to the lobby but your opponent can: You will be DQ'd. We will make 3 separate lobbies to help you get in, but if you fail to join 3 times you will just have to take the loss. I know connections sometimes have issues with certain people and that is just the nature of online gaming unfortunately.

You can voluntarily DQ yourself if you know you can't make it to your next match on time. This would save time and it would be nice to let me know if you can't make your matches for whatever reason.

If you are not online or not on my friends list (or you fail to tell me that your challonge name is different than your PSN name) you will automatically be DQ'd no questions asked. There will NOT be a 5 minute timer to join because I can't send you an invite.

If I get disconnected during your match then play your match like normal and it WILL count. Just let me know who won the match and back out of the lobby so we can start a new one to get the set on the stream again.

If anything comes up that is not covered in these rules and regulations then I will have to make a call on it on the spot and make sure that it is covered for future tournaments. Hopefully I covered every possible scenario so far. After running 19 online tournaments for MKX, I don't really see too many more possibilities, but you never know.

All tournaments 100% FREE to enter. Tell your friends and everyone who you think would be interested in playing or watching these weekly tournaments and if you can share this on social media that would be awesome. The more the merrier!

Weekly updates and registration links will be posted in the above places. Hope to see you in the stream! Good luck to all the kombatants

Pre-Season is now over!

Life is a block string with no gaps.

You bout to buy yourself mk11