"Live for nothing, or die for something"​
John Rambo is not getting his due hype. Where are the Rambo mains?!

Premium Supporter
he will get more hype, well deserved hype, once the kombat khast for him come out ...... people wil figure out his gameplay will be fun and cool, hehe !

As with every guest, I am salty its not Ash. But there is tons of potential here - PRAYING he isn't a Robocop clone and is a lot more like MKX Predator.
T

I'm definitely going to play him on release but my expectations are low. I'm predicting a zoning variation with the bow and or guns, a trap/set up variation and my personal preference a rush down/brawler variation with that big ass knife, a safe overhead and a 9 frame mid, haha. I hope he's quick and agile, both Term and Roboflop feel too clunky and slow.

Rambo having a variation based on traps would be sick and is the only way I'd consider reinstalling this game.

I'm stoked for Rambo. He's like the exact character you never knew you wanted but now can't imagine not being a MK guest. His dialogue is going to be epic. His brutalities will be spectacular. He'll be zany and fun and automatically have an edge because he'll trigger all the MK fanboys who hate guests. What's not to love?

As for his move set, there's no reason to expect him to be stiff and clunky like Robocop and Terminator (that wouldn't make any sense), and I honestly don't expect him to be a hardcore zoner either. In terms of MK11 similarities, my guess is that we'll see a blend of Nightwolf, Kano, Sonya, and Erron Black.

Good walking speed and decent dashes. His buttons will feel like a brawler: Quick, forceful hits with an unrefined style, looking to disable his opponent, heavily featuring his knife. Probably no long-range single buttons, but good advancing strings. I don't think he'll be a grappler per se, but I expect at least one true throw string (like NW's s22,1+3) and a command grab that might be a launcher.

He'll have his bow of course. I'd bet on some kind of explosive arrows, probably with slow start-up but fast recovery (think Raiden's lightning bolt), hopefully with the ability to delay or cancel his shot. Won't really zone with it, but will help him with mind games and controlling movement.

He'll have a machine gun too of course, and I'd bet on a MG stance, maybe with a shot count like EB. It'll have a full-auto move, naturally, but I wouldn't be surprised if it arcs up (like Spawn's AA gun) or has a long cooldown/reload, so he can't spam with it. Different ability slots will probably change what his MG stance can do (low shots, faster cancels, etc).

As far as other ability slots, I'd expect see some traps for sure, like EB's beast trap (though hopefully more practical). He might have a mult-hit combo ender special like Sonya's ass whooping. And I wouldn't be surprised to see some version of Sonya's melee parries: fast start-up (to interrupt gaps) but can't be held.

Please don't just be Nightwolf with a gun. I really hope he has traps all over the place
J

I see a kung jin type with the bow. Could bet on it hopefully more like green arrow injustice style cuz Jin was zero fun but green arrow was so fun!!

Kiss the Missile said:
Please don't just be Nightwolf with a gun. I really hope he has traps all over the place
Click to expand...

At first, I was worried about the similarities with Nightwolf. But NRS is usually really good at making guest characters unique. I just hope he has the mobility and speed that Nightwolf has. I am going to be pretty upset if he plays like a big body character.
T

Agreed...the man is 5'10" (according to Google) so I'm hoping they keep him agile. Hoping for Kanos mobility but also a character that is actually finished and his main strings don't whiff on half the cast.

This skin please and why not....

Premium Supporter
Rambo probably will have some gadget like proximity mines, or time bombs stuff , hehe .... wait and see !

wotnografix said:
This skin please and why not....View attachment 17582
Click to expand...

xenogorgeous said:
Rambo probably will have some gadget like proximity mines, or time bombs stuff , hehe .... wait and see !

And they will all disappear even on block like Terminator's.

So surely his storyline will be that Kronika has kidnapped Colonel Trautman after he volunteered for a mission (again) and Rambo has to leave his peaceful existence of twice a week fighting stick bouts to rescue him.
Trautman can't keep his ass at Fort Bragg it seems.

Kronika will tempt Rambo with something...what shall it be...?

What about an upclose fighting style using escrima sticks like you can see him use in the beginning of the 3rd movie.

Sugarwatermixlegit said:
As with every guest, I am salty its not Ash. But there is tons of potential here - PRAYING he isn't a Robocop clone and is a lot more like MKX Predator.
Click to expand...

Would be kinda cool if he was like green arrow from injustice with traps. I’d play some Rambo for sure. 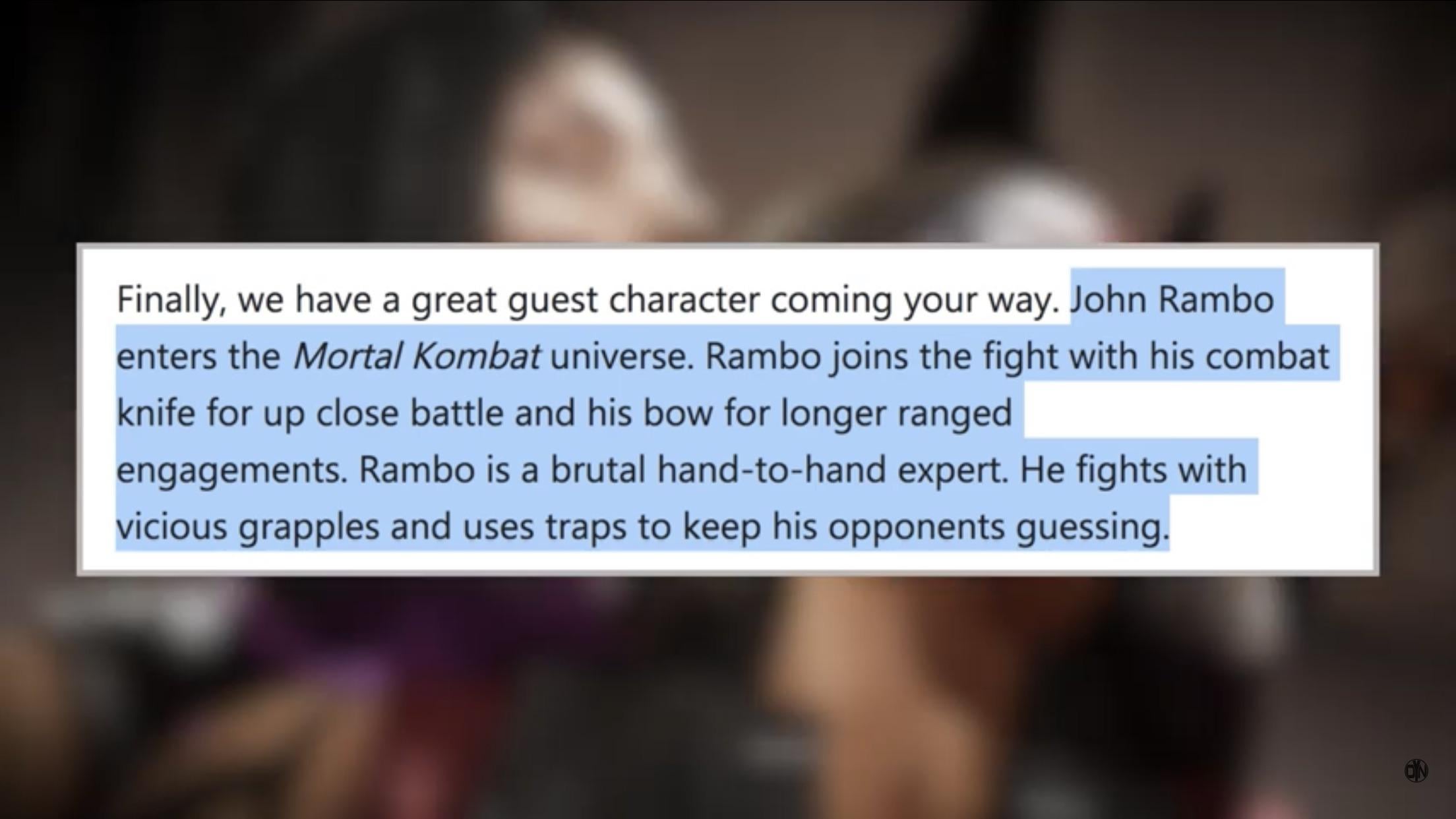 Hmmm...well he's gotta use guns somehow. Probably toned down like Spawn....and then over the top with guns in fatal blow like Spawn.

But he'll use a command grab...maybe they will again stray from the down back forward motion. And we'll see how his traps are different from existing ones...or if they are allowed in ranked heh.

Also I think they should make this one of his outros...

Do we get to win this time?

Lets see if they gonna put 1 graplling move or 2 , and pray to get some commando kano parrys tooo
RAMBO has a HUGE POTENCIAL to be TOP 3 easy if not the best char in the Game ...

LIU KANG : i thought i was the chosen one
RAMBO : i never asked for this

I really hope he leans into the traps and commando grabs to be a set-play monster. Very excited to see them soft-peddle the guns in his bio, hoping that M60 only comes out for a big FB or Finisher (where it belongs).


Hara-Killer said:
Lets see if they gonna put 1 graplling move or 2 , and pray to get some commando kano parrys tooo
RAMBO has a HUGE POTENCIAL to be TOP 3 easy if not the best char in the Game ...

LIU KANG : i thought i was the chosen one
RAMBO : i never asked for this
Click to expand...