PAY TO PLAY MKX AT EVO? ARE YOU F***ING KIDDING ME?

Last year for Evo, MKX had one of the largest pots in FGC history. The absolutely amazing people at NRS put up $50k for the top placers at the "World Tournament" of Fighting Games.

The hype was REAL.

What did we get? Ha! We got treated like the side tourney Mr. Wizard wanted us to be. Absolute disrespect for the NRS scene and the folks at NRS who passionately fund us. We were treated one step about Divekick. Abysmal stream times, the lack of care for the MKX portion, the overall result was a shit product.

After they treated us like absolute SHIT, Mr. Wizard had the balls to sit there and tell NRS community that MKX can be in if we PAY? WE PAY YOU TO HOLD A TOURNAMENT AFTER HOW DISRESPECTFUL YOU WERE TO US? YOU ARE AN ASSCLOWN.

I swear to GOD if I hear about ANY of you guys paying Mr. Wizard's ass any money to fund a tournament for a game that he NEVER GAVE A SHIT ABOUT...I'll find a way to get your ass banned from all of the amazing venues that have shown NRS as much respect as they do Capcom...ESPECIALLY TCW.

@Mr Aquaman deserves our community contributions for the amazing work he and the crew do at TCW and the dedication towards the NRS scene that he has been unquestionably loyal to. Someone who DESERVES the money.

Besides, Evo is a Street Fighter tournament anyways...Everything else is a side tourney, boys.


PS - I know that I2 will be out...but I'd rather the man just straight up say "No MKX" than to demand money for us to give him to have the tourney...which would be even MORE disrespected than it was last year. I pray you don't think the money will make him give a god damn about MKX.

TL;DR - If you give Mr. Wizard any money to have a tournament for a game that he and the EVO crew treated like shit when it had one of the biggest pots in FGC history, you are dense as fuck.

Premium Supporter
Well most people thought Injustice 2 just gonna replace MKX so at least there is a 0.1% chance we get both.

We'll burn you all—that is your fate!

This is the second time they did this. And the money goes to the make a wish foundation. So it goes to a good cause. They didn't have to have this option. They could instead just said NOPE.

Premium Supporter
Get your shit together folks. 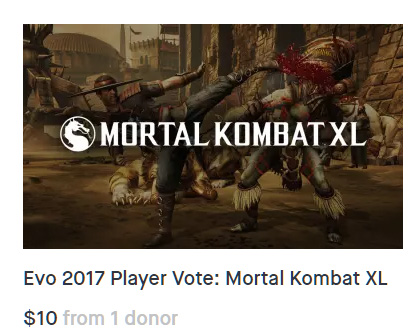 MKXL is in last right now.

Go vote if you want it back.

People been saying this since last evo and kept asking for the switch from evo to one of other majors where MK is the main game such as KIT or CB. This idea should come true, tbh evo is 95% about capcom anyway

Spot on. When I read that announcement I was shocked by the pettiness. Might as well altogether say no MKX than passively making a mockery out of it.

shaowebb said:
Get your shit together folks.

MKXL is in last right now.

Go vote if you want it back.

Where it should be. Its over fellas. Start brushing up your back-to-block skills

GrimJack said:
People been saying this since last evo and kept asking for the switch from evo to one of other majors where MK is the main game such as KIT or CB. This idea should come true, tbh evo is 95% about capcom anyway
Click to expand...

Tbh, TCW should be it. Great location in the middle of the East Coast. Ran by NRS guys.

Administrator
We will not be having these threads... all money goes to Make A Wish. Stop bitching and start donating.