Kitana borrowing a move from Mileena: Good or bad?

This has been debated upon a bit. I thought I would create a new thread for particular subject to gather some opinions.

Personally, I like that she has Mileena's teleport kick. As Mileena is not (currently) in the game, I see no harm in it. It's only one move anyway. The sais, I don't mind either.

This doesn't necessarily mean Mileena won't be DLC, as there's other characters that share the same or very similar special moves.

Every time someone farts, a demon gets his wings

Premium Supporter
Personally I don´t like it! Why? Because it makes no sense to me. Kitana and Mileena hate each other with a passion. Why would Kitana do that? Doing it with her BFFs (jade) weapon in MKX made sense to me.

This also totally disconfirms Mileena for me (please NRS proof me wrong) and I´m not even a Mileena fan. I just want to see her so the crying finally stops lol

I think it's cool, don't get what the fuss is all about.

In the end they're moves in a videogame and people are acting like it's the end of the world. And I say it as a Mileena main in MKX.

Do you hate Kitana too?

GLoRToR said:
Do you hate Kitana too?
Click to expand...

I thought it was cool to have a Jade variation called 'mournful' and now that she has a few Mileena moves, i think the concept of Kitana having a'mournful' variation with shadows of dead characters is kinda cool/neat. MK10 is 'mournful jade' mk11 is 'mournfil mileena' and mk12 will be 'mournful whoever'

Don't particularly care. I probably won't be using a variation that uses it as I generally don't care for stance mechanics. I played Mileena more than Kitana in X but came to terms that she might not be appearing in 11 as soon as she was offed mid-story. I don't consider it "insulting", as someone on this forum once said it comes off more as a "tone-deaf" attempt to appeal. Unfortunate that so many take it so personally.

Bad, really bad, too bad, for the following reasons :

1)Disresprect for a fan favorite character, that, was choosen to not be in the game ... what if , in the next game , they just put Kitana out and put half of her moves to other character ? I bet that Kitana fans (me included) would hate Ed and NRS for that , yeah ?

2)Descharacterization of individual moveset : seems like Kitana , being more popular among the female ninjas, it's being used as some kind of freak placeholder used to flatter, to please, to bajulate fans of others characters (Jade and Mileena), having moves of these characters in their moves arsenal .... this is childish and poor coming from NRS .... I mean, if they do this, show how insecurity and afraid they are on doing decision of taking out someone popular from the games, but, putting something of them in other characters ? wow, really ? or just they do this to troll, provoke and send a message to the fanbase ? I know there are some annoying disgusting fanatics of MK characters that bother Ed Boon in Twitter, but, if you want to take out a character from the game, be professional, do it in a complete way , IMO .... letting traces of this absent character somehow in the game, just make things much more worse

I bet that , some years in future, when we have MK12, people will joke a lot about "hey, what's up ? what character this time, will be trolled, and have his/her moveset stolen and given to Kitana ? who you wanna bet that will be fucked up this time to favour Kitana?" ... and other kinds of memes about this "traditional" subject , hehehe

I don't think it's that deep lol

What if they gave scorpion subzero's ice ball? or give jacqui insta air fireballs from liu kang?

Why not give jade kabal's nomad dash?

THIS IS BAD, a character should not borrow moves from another character, even if that character is not in the game.

bUt KiTaNa AlReAdY hAz HeR SaI!!

I've never liked it cause it felt like a cheap way to get an extra variation to Kitana, and a cheap tribute to a character. Its like "Sub Zero wanted to avenge his brother, so he learned how to conjure sentient shadow clones, and a spell that drains his opponents stamina." Me personally I would hate it cause the closest thing we would get to Noob is having to use a character who has no business doing any if those moves and that effort couldve went in to something unique for Subby

its not the first time she did it:

LightsOut452 said:
What if they gave scorpion subzero's ice ball? or give jacqui insta air fireballs from liu kang?

Why not give jade kabal's nomad dash?

THIS IS BAD, a character should not borrow moves from another character, even if that character is not in the game.
Click to expand...

The difference is, Scorpion having Sub-Zero's ice ball wouldn't fit his character. Kitana and Mileena are are both agile female ninjas, so a move like that fit them fine.
Last edited: Apr 15, 2019
K

I don’t like it. It takes away part of Mileena’s individuality. I love her and I played with her a lot in MKX (Kitana is main tho), but in respect to her character I would be happier if she didn’t appear in MK11 at all rather than having her moveset given away to other character.

It's not bad per se. But it means Mileena might sit this one out. I feel bad for Mileena fans, but at the same time I don't like the character so I don't really feel that bad

I'd rather have Mileena having some of the Kitana's moveset and Kitana not to be in the game.. How would You like that Kitana fans?.

NothingPersonal said:
Also Derek is a big pussy if he let's Mileena sit this one out

simply loved this comment of yours .... and yeah, I happen to agree with ... all that love of him demonstrated in MKX for Mileena, for now, replaced it by Jade, hehehe .... traitor !! ahhahah

xenogorgeous said:
simply loved this comment of yours .... and yeah, I happen to agree with ... all that love of him demonstrated in MKX for Mileena, for now, replaced it by Jade, hehehe .... traitor !! ahhahah

He did? Well, that's another brick in the wall imo. Maybe he did change to Jade because Mileena is not in.

neveradestroyer said:
I'd rather have Mileena having some of the Kitana's moveset and Kitana not to be in the game.. How would You like that Kitana fans?.
Click to expand...

they would feel like this, despite they will not admit it .... 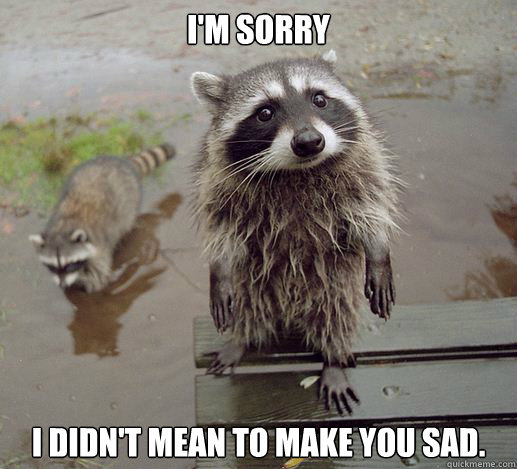 Ask me about my Mileena agenda.

I think I'd rather stub my toe every morning than see Kitana use another move that wasn't originally hers.

NothingPersonal said:
He did? Well, that's another brick in the wall imo. Maybe he did change to Jade because Mileena is not in.
Click to expand...

oh yeah, he did it .... see in previous KK how strangely happy he is using Jade ? so, treason then, hahaha

you saw in KK when Kitana put that sai way and did Mileena moves ? none of them there said one word about it, you can feel in that moment in KK , some "uncomfortable" aura feeling around everyone there when having to show Mileena moves on Kitana .... that was as almost like they hated to do that (promoting Kitana using Mileena's moves), but they had to, kinda as an obligation .... hehehe .... nobody was excited there , at that specific moment in KK, when showing that variation of Kitana, you can feel it in the air, hehe

kabelfritz said:
its not the first time she did it:

Off-topic, but can we get this gibberish for Kitana again?

Dont like it; once again Kitana has to share her moves with one of the girls that is sitting out, because god forbid I guess we have Kitana/Mileena/Jade all in at the same time anymore. She can't just stand on her own, and I doubt Jade/Mileena fans have been happy about it either.
You must log in or register to reply here.
Share:
Facebook Twitter Google+ Reddit Pinterest Tumblr WhatsApp Email Link
Menu
Log in
Register