In case you missed it...the final DLC character is... 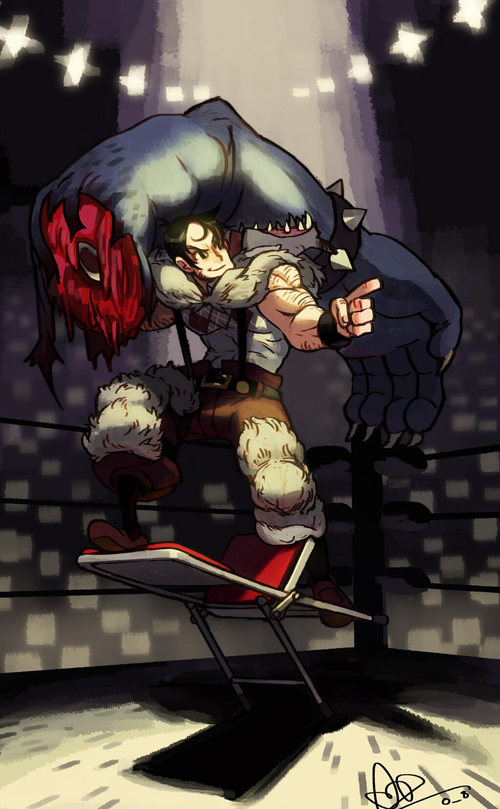 Inspirations for this character include Macho Man and Ultimate Warrior , his chair is named "THE HURTING" and things Mike Z has stated he's thought of doing include...
Nothing is in stone, but if any of this makes it in it will be hype!

Last night on Salty Cupcakes Mike Z called in to reveal this. Also Ravidrath on Neogaf who is crew with Lab Zero revealed the other day that he was meeting with a "potential investor" this week. Keep your hype in check, but they are picking up momentum. Especially since after the 360 patch went out Skullgirls hit #1 on 360!

PS they showed more tweaks in the Skullgirls engine last night and apparently Parasoul will be getting a Glide like Storm and if her feet touch a bomb it will explode and super jump her into the air.
K

I really wonder why people voted for him. There were so many boobs available. Boobs with even better sounding play styles.
Not that Beowulf is not an interesting character, but come on ... boobs!

I already have my Squigs <3 So best of luck to all the Beo fans. May they heel turn many a time with their chair :3

Lead Moderator
Wait, that guy from the old poem?

Goldfish said:
Wait, that guy from the old poem?

No, its only the name, he is completely another guy.

Was really hoping for Brain Drain. :/

There were just so many better options.

This game needs more dudes, at least to distance itself from a reputation as a loli game.

The Borax Kid said:
This game needs more dudes, at least to distance itself from a reputation as a loli game.
Click to expand...

All underage characters are covered accordingly.

I don't see your point?

We already have Big Band filling the Token Male slot. :/

Premium Supporter
Token male slot? Dude, its a fighting game and no one is token anything in Skullgirls.

shaowebb said:
Token male slot? Dude, its a fighting game and no one is token anything in Skullgirls.
Click to expand...

huehuehue I love this game though. So it's Squigly, Big Band, and Beowulf then? Is there news of when they'll be released? Are they in a pack or separate DLCs? How much each? @[email protected]

Premium Supporter
Squigly ,Big Band ,Beowulf ,AAAAAAAAAND Robo Fortune. Not much word on time frames though. Expect a decent enough wait though as its all hand animated and has a lot of code work once done to balance and test them all (especially with this games assist feature).

I personally wanted Brain Drain instead.

I personally wanted Brain Drain instead.
Click to expand...

all aboard the brain train?

I personally wanted Brain Drain instead.
Click to expand...

Well, I got Eliza so I'm happy.

Blood for the blood goddess!