Dyzvhtynzal said:
How's everyone's writing coming along? For one part of my latest tale I converted a Spenserian sonnet i made into binary code, and am trying to finish a cypher that relies on a formula to decipher. Taking up lots of my writing time.
Click to expand...

Cypher ended up being 1848 unique symbols. If i ever became a murderer, i'd embarass the Zodiac killer. When i get a chance to scan it, maybe i'll throw it at you guys. The binary code part is too easy.

The Power of Lame Compels You

Moderator
Put my brain bits to work and wrote some little tidbits.

CrazyFingers said:
Put my brain bits to work and wrote some little tidbits.
Click to expand...

Good stuff. I like the first one more of the two. One suggestion and feel free to ignore because I’m no poet but I think it would be more effective to start with “of derelict dreams” rather than “a frozen swamp of derelict dreams” but if you like the image of a frozen swamp then that’s cool too. Same with the second one. I would start with “of stabbing thoughts”. But nonetheless good job.
T

I will totally read it, but do you have it on Google docs or somewhere other than this horrible ad ridden unzoomable wasteland

Cant get cipher to load. Anyway, i'll leave story up for 2 weeks then pull it down.

Anybody check out my story? I need to know what is good or bad about it. Trying to make something unique.

It is ok for a rough draft. There are grammatical errors all over the place and some extreme no-nos like using ... Which is of course not a punctuation at all but a short hand to avoid proper grammatical writing. This is not a bad thing really. Polish is a final step for a reason. So cleaning up sentences with conjunctions for the first word or a paragraph that uses the same word to many times and removing a lot of the unneeded adverbs and stuff is a low priority change that you can do way latter, but it would need to be done.

I think the structure is a little wonky though, and that is more serious. The first person swaps from formal to conversational to what I would think of as a diary. As in sometimes I feel the text is speaking to me, speaking to themselves or speaking to another person who is right in front of them. Am I reading a letter, eves dropping on people chatting or is it a person talking directly to me? I dunno. I seems to be all the place and then it has the quotations which are more confusing and even titled time breaks like a diary or a real time event log.

As for the content, I'm not going to comment on that, as stories, particularly proto-stories are so fluid and unformed. I can not give constructive criticism on it really, as writing is a person thing, so my personal reactions serve nothing. The worst thing you could do, imo, is ignore your own taste and try to write "for" others. Is it original, is it unique, well not so much for now, but I have no idea where it goes and what you plan is, so it might be.

@Jynks
Ok. Thanks. The writing is being told by one person, but switches to past events as if they were happening now or in real time. Why is ... A no no. It just indicates a pause. As for adjectives and adverbs, i think they too many people believe they're bad because they were told so too many times. What other grammar errors were you talking about? I already had several people from my writing group critique the first 5 chapters , so you have me curious. I do think my use of single quotes to indicate past conversations may be problematic, but could you please be more specific on the other errors you mentioned because i'm not sure what you mean. Also, why do you think it is not original as of now. What makes it seem like some story you've already read?

Thanks for reading. And thanks for your time.

Anybody write anything lately? I'm on Chapter 11 of my latest work. Working hard on it. Let me know what you're working on.

Lead Moderator
Premium Supporter
Yee, I wrote a lot during the quarantine. I finished this western, Red Dead inspired story at 50K words, and wrote other things in between that. It’s been fun.

I wrote a poem a little while back if anyone cares to read it but that's about it.

I've found the opposite in quarantine, life is all stagnant and I have no motivation to write at all.

Nice poem, Caleb Hara. VSlayer, put your story out for us to see.

Five years ago I wrote a MKX scenario in which I assaulted the Sky Temple, defeated Raiden, absorbed Jinsei's power and became Corrupted.

Ed Boon looked at it and he said he liked it. Then he added "In the end, Cassie Cage defeated Corrupted Shinnok and Raiden decapitated him."

I hate you, Ed Boon.

I found a cool blog post that may interest someone into writing.

Anybody write anything lately? My latest work is taking longer than expected because I'm using real world locations and people and have to do more research than I thought. Anyway, keep writing.

I finally got enough motivation to write this the other day, if anyone still mucks about in this thread and wants to read something.

Korean barbecue is a peculiar and interesting dining experience, boasting a laborious set of customs and practices that make it a pleasant farcry from just about every other restaurant variety&nbsp…

A prop on the stage of life.

I got over my massive depression and did decide to continue my fic for my final fantasy 14 character. I can't seem to let the game go despite being 'bored' of it.

Guys i'm working with a comic book studio team and will be releasing several Angolan super hero stuff for the next year, working on first volume, structuring the universe and so much more, a lot of culture reference to my country and lots of research as well.

My techno Triller (Shadow Geist) which its a spy/anti-hero series also was approved and well received and it's finishing up the drawing by professional artists.

Not sure how our international expansion will be, but if you guys ever get a chance to read these stuffs, know ya boy has been working hard.

Apparently my experience with martial arts, reading a lot of books, watching everything, listen to anything and playing everything is more than enough to make me a well versed person in research that can tackle different topics depending of what the team has envisioned.

Fusion doesn't need translation as it's a collective of independent studios who fused into a bigger collective, we're almost a company now.

We've been working on this for a year now, and we're finally wrapping things up to start our selling program, hopefully with the grace of the lord we will do well.

We also have a goal with this, we're fighting for equality and respect, as ppl that enjoy drawings and comic books are currently the black sheep of the country, artists are not well respected, badly paid and some even say it's not a real job, if we win this fight, it will open a lot of opportunities for everyone, for writers, artists, gamers and much more ppl who work directly involved in the project.

Goo luck. I'll check it out. I always thought my work would be better suited for comic books or film. Keep writing.
T

Anyone here approaching publication? I'm just about finished with my very first book, and while I've done some toying around with printing books and distributing online, I really have no idea what the battle plan. Has anyone else ever actually released anything? Had any success? Fails? Recommendations for cheap publishers / producing houses?

Hey there. I self published a novel when I was at a weaker writing strength (back in 2012) and regret it. I regret it because it needed more work. I shouldn't have tried to self-publish. I should have sought a literary agent and developed a good query letter/background, etc. Since then, I have fixed up the novel, wrote another one, and have about a dozen additional short stories/novellas ranging anywhere from 2000 - 30000 words. I feel like one should have a nice body of work before even attempting publication, but what the hell do I know. If anyone is interested, I'll throw my latest work out here. Let's face it... If you're a writer then you have a strong ego. You want to compare your work to that of others, and mine. I may not be here as often as I used to be, but I'm still here. I want to show you/compare my work with yours. Let me know if you are interested. Maybe we can grow together.

So I finished my book. In the next couple of days, I'll be launching a web site and figuring out how to an ebook and starting a patreon and all that good stuff but what I want is for people to read it. Since you guys are my culture, I'm starting here. 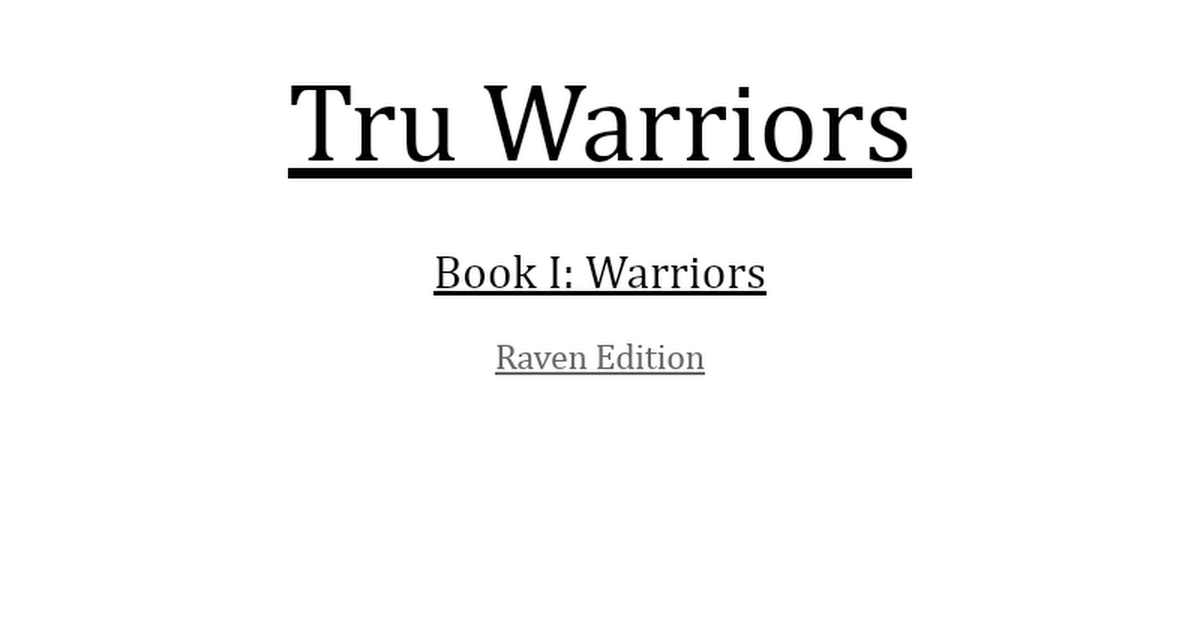 Tru Warriors Book I: Warriors Raven Edition The Way (excerpt from “The Will of The Way”, an unpublished manuscript by Lona Troy) My relationship with The Way began rather… surprisingly. Years ago, an old friend of mine (let’s call her Linn) fled the ‘States at the end of a particularl...

There it is, take a look. It's on Google drive and I left comments on cause I do really want to what people think but there it is. Tell your friends, print it, whatever but pretty please read it.

If you want a hard copy details on that to come.