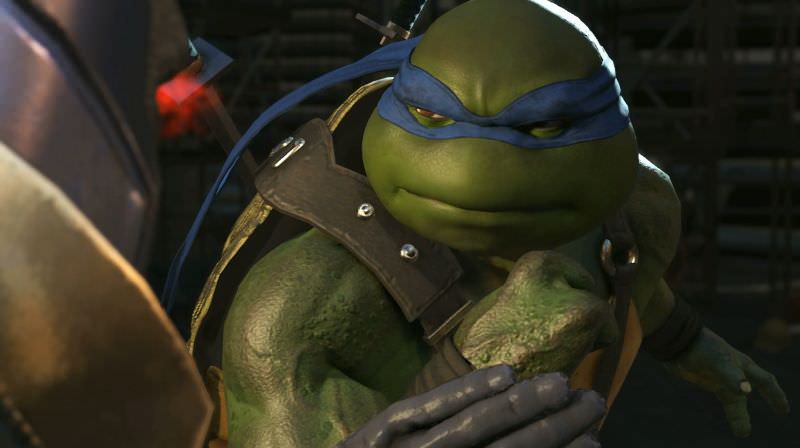 In order to dispel rumors that the upcoming TMNT trailer is actually just going to be a series of images we need to piece together, Ed Boon has finally posted something in motion. In this 4 second gif (posted below) we can see what looks to be Raphael's idle animation. With this, we now have a lot to piece together from the various snippets we've gotten from Twitter.

Ok, not really. Personally, I think it's a little weird that Donatello has yet to show up in any of Boon's Twitter postings, but I think that's more of a coincidence than a conspiracy against the purple clad turtle. If you didn't catch it, that image above is also new. It looks like it's from a clash. I thought Leonardo had a weird black hand, until I realized it was Darkseid's. That was fun. Sooooo, yeah. Can we get that trailer NRS? Eventually, you are going to run out of things to tease us with.

Your Tech is Mine! #buffRaiden

Teh Ralph sex is near!

Premium Supporter
So this at least confirms that it's not just one turtle with the others as "assists", I'm hype.
Raph better be the best turtle.

Raph looking badass as ever
T

Leo and Donny definitely not doing that with their weapons so either Raph drives or they all have different idle animations too.

Premium Supporter
Makes me want to break out those reissue TMNT figures from the 2000s.

I've always been fine with guest characters if they're done well. but for the people that usually hate guests, i think its sort of a brilliant business move to add these guys. idk how much was set before I2 release (probably most or all), but i think it's great that rather than backing down from their approach to guest characters, NRS went the other way by adding probably the only guest character(s) almost no one will get pissed about.

timing it now is also very smart; dbz and sfv ae will be a few weeks old when tmnt come out, exactly when people will be open to I2 again and ready for something hype. long con at play here.

I will leave my seal on you!

It looks so god damn awesome! I can't wait! The hype is getting stronger!

They look really good design wise and i am pretty sure that they will be fun to play but i am not hyped at all, and that's really sad.
Enchantress remains the most interesting DLC character for me.
You must log in or register to reply here.
Share:
Facebook Twitter Google+ Reddit Pinterest Tumblr WhatsApp Email Link
Menu
Log in
Register