Joke characters are known for being awkward/over-the-top and/or having a clumsy/strange playstyle. I'd make a distinction from actual characters that happen to be funny and charismatic, like Johnny Cage and Faust.

Also, joke characters' lore is usually weird or silly. And sometimes they're parodies of other characters! In the end I think they're meant to be funny just for the sake of it. However, the sense of comedy is very subjective, so what's funny for some it isn't for others. 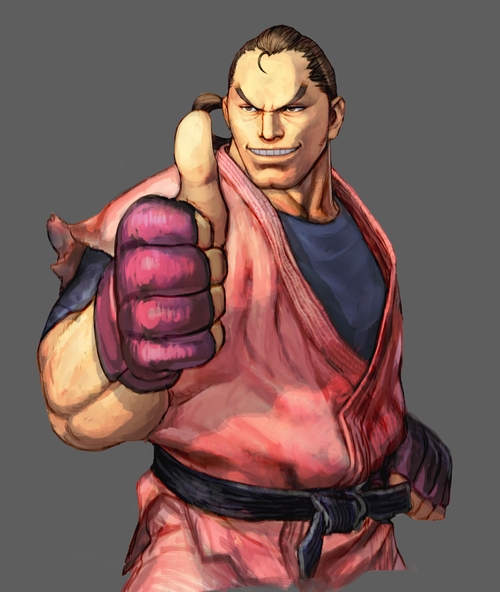 He's Capcom's response to SNK getting too much "inspiration" from SF characters for their Art of Fighting games. Dan has the handsome face and hairstyle of Robert Garcia, the (pink) clothes of Ryo Sakazaki and the thumbs up pose of Yuri Sakazaki.

Mortal Kombat has a few characters considered to be joke characters. Meat is one of them:

Like seriously lol
They tried to flesh him up a bit in Armageddon but still... his story is really weird and pointless lmao


Mokap, who was a tribute to Carlos Pesina but his role in the game was just meant to be a funny character. 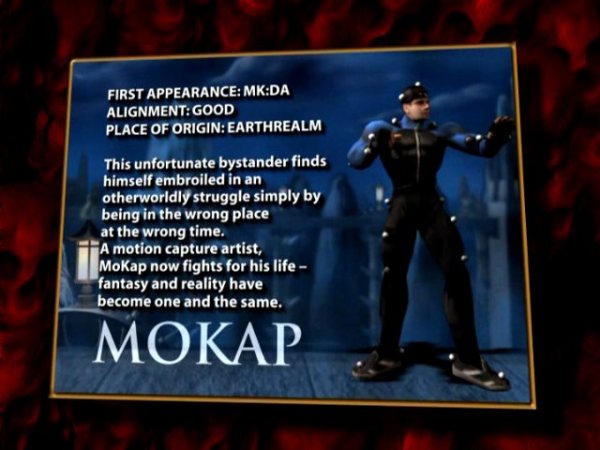 And of course Bo Rai Cho, who fights with farts and puke. Not everyone is a fan of him lol but he managed to be playable in MKX! Nicely done, Bo Rai Cho.


Skullgirls has two joke characters. One of them is Fukua, she was introduced in an April Fool's Day joke trailer back in 2014, which was a parody of Capcom's Decapree announcement that was seen as a huge letdown by everyone at the time.


She re-uses a lot of Fillia's sprites but plays very differently. Fans liked her and asked the devs to keep her in the game. Then she received a story mode that was very strange lol


The other joke character is Robo-Fortune. The reference to Robo-Ky is clear, but she also "plays" like a Guilty Gear character in some way. The thing with Robo-Fortune is that she is loaded with silly puns and quotes and her story mode is incredibly silly with some cuteness and epic moments. 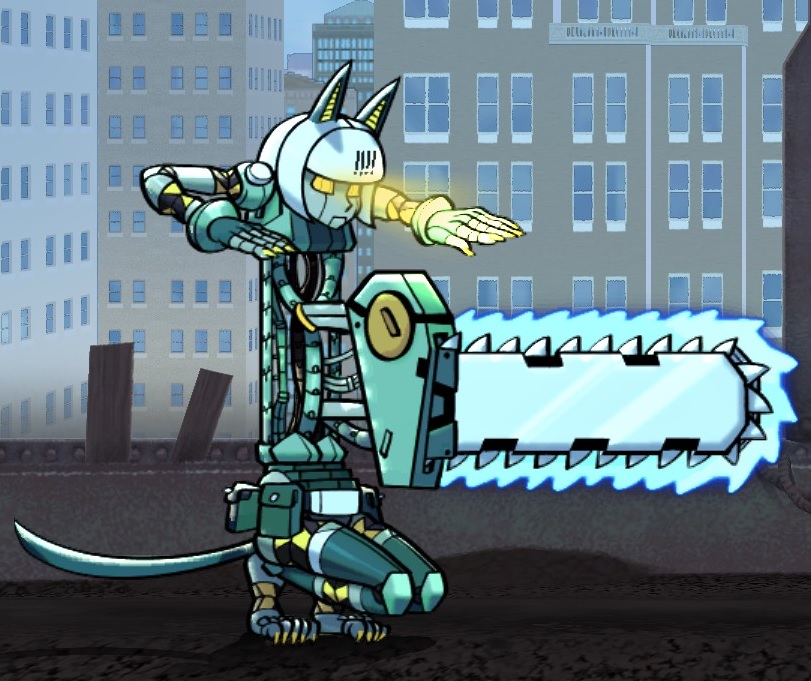 She is mostly valued by her Theonite assist. But I use her kinda seriously lol right now she's kinda my main

I've seen Jam Kuradoberi from Guilty Gear be considered a joke character by some players. She has a good moveset, but she's also very loud and obnoxious lol and her whole story is very wacky. There's this point in the timeline where a bounty is placed on Dizzy's head and many bounty hunters show up to try to kill her and claim the reward... and Jam shows up because she wants the money to start her own restaurant. After everything happens and nobody claims the reward, she does and starts her restaurant... that burns down for some reason.

Would you consider Mokujin and the bears from Tekken to be joke characters?


Despite their wacky antics, joke characters can be deadly! I think it's because sometimes people don't really know how to deal with them, especially when they have awkward and unpredictable playstyles.


Do you play joke characters?

Have you ever been defeated by one of them?

Premium Supporter
I love joke characters, but mostly because I have such a hard time taking fighting games too seriously. So I like it when games have a little fun and can make a few self-deprecating winks.

In Fighters Megamix you could play as a car from Daytona USA, that's hilarious and fun. Loved it.

Having said that, the Set above with KitanaPrime and Mr Aquaman was great fun to watch. It also shows why I miss live, in-person events and am looking forward to them coming back post-pandemic. The amount of personality and fun the two put in was great and so entertaining to watch.

How you gonna leave my boy bang shishigami off this list... One of my favorite characters in any fighting game.

DeftMonk said:
How you gonna leave my boy bang shishigami off this list... One of my favorite characters in any fighting game.
Click to expand...

Oh I'm sorry! I don't know much about BlazBlue lol


I just remembered another character that I've seen considered as a joke character: Lowain from Granblue


I just remembered another character that I've seen considered as a joke character: Lowain from Granblue
Click to expand...

Lowain is actually funny and clever, unlike pretty much all of the other examples.

I loved Dan in SFIV, I was even a Dan main after I got back into it since I didn’t want to relearn Ibuki. He was fun.

Voldo in SC lmao But nah I don’t mind joke characters. It’s the ones that are a little too much like Meat and Mokap I have problem with. But they’re retconned (maybe not Meat but Mokap definitely is) so I can rest peacefully.

I dont really care what a character looks like of their background. I only care if they're gameplay is fun or not, jokey or not.

If Roger the kangaroo counts as a joke character, then I enjoy them. He had SUCH cheap bullshit in Tekken Tag 1. He was by no means good, but shit like F,N+1 on BLOCK guaranteeing a DP that took a 3rd of your life was something that drove people nuts if they didn't know the match up. His DB+3 and SS+4 were also fantastic.

People seem to have their own definition of what joke characters are. The original definition was characters that were intentionally made to be low tier and basically unplayable on a competitive level. IE Servbot and Roll in Marvel vs Capcom 2. or Dan in pretty much all of his incarnations prior to Super Street Fighter 4. However the internet message board definition of it seems to be characters that look silly or have goofy looking movesets(disregarding actual balance), characters that have a silly/comedic personality or characters someone personally doesn't like.

Life is so hard as is, it's nice to be able to have a character that can let loose and be goofy.


Faust gives everyone afros, he is a gem and the FGC should protect him at all costs.
T

I've mained Dan in every game he's ever been in, including Puzzle Fighter where he literally kills himself. )=
O

Roll in MvC2 was fun because she was just so damn hard to hit.

Not in the slightest. Same goes for guests… which I consider the same thing.
Last edited: Jun 15, 2021

I agree. I don't really consider off the wall characters like Faust, Jam, Bang, or Bo Rai Cho "joke" characters just because they're wild or weird. They are fully fledged characters with usable tools. Hakan is a bizarre oil daddy, but he's not a joke.

To me a Joke character is someone who is either purposely weak (Dan in the old games, not so much now) or breaks basic rules of the game (Roll and Yoda low profiling every attack by virtue of standing at knee height).

I don't mind joke characters, but I'd rather just see more crazy/wild characters.

What's the point of a random Krypt?

I guess Yoshimitsu is a joke character, and I love him. Everything he does is just so fun.

I never even played this game but I'll suggest 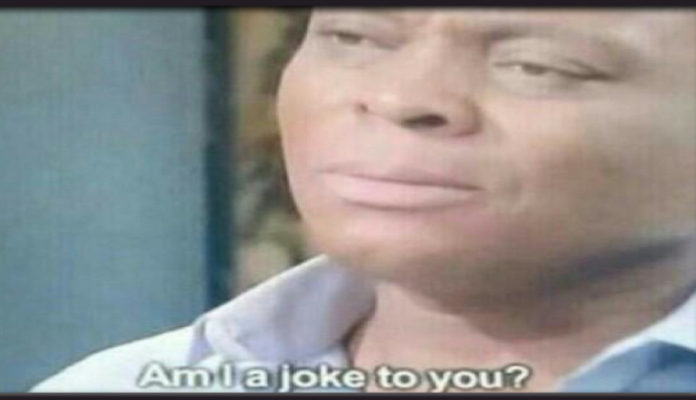 Wrenchfarm said:
I agree. I don't really consider off the wall characters like Faust, Jam, Bang, or Bo Rai Cho "joke" characters just because they're wild or weird. They are fully fledged characters with usable tools. Hakan is a bizarre oil daddy, but he's not a joke.

To me a Joke character is someone who is either purposely weak (Dan in the old games, not so much now) or breaks basic rules of the game (Roll and Yoda low profiling every attack by virtue of standing at knee height).

I don't mind joke characters, but I'd rather just see more crazy/wild characters.
Click to expand...

Yeah, I get that. Especially when it comes to Roll and Yoda lmao Literally ridiculous.


Marinjuana said:
I never even played this game but I'll suggest