Do we really need KP3?

I ask this question because pretty soon MKXL is getting a balance patch in hopes to balance everyone on the roster. Alien needed nerfs from the start. After much frustration and bitching, 6 months later NRS is finally taking action. Let's say the entire roster becomes balanced, which is something we all hope for. Who's to say that KP3 won't need tweaks of its own if it does comes out. There could lie the same issues we had with Alien, Tanya, Mileena, etc. and giving that Inj2 is right around the corner, there may not be another patch for MKXL ever again or at least for awhile. Do we really want to put ourselves in a position that will possibly have us bitching all over again? Maybe we should forget about KP3 and just enjoy MK after this patch, assuming they balance and not tier shift. Let's just appreciate the game and be thankful. What do you guys think?
Last edited: Sep 22, 2016

KP3 is not happening

No, this games got maybe 6 months or so left of having a legit competitive scene, and the same goes for its online community(gameplay wise). When inj 2 drops most people are gonna switch, no point spending resources on mkx at this point(beyond small balance changes).

I wish kp3 was happening. I feel like Mkx is a great game, and I hope it has a long life. I also have no intention of playing injustice so I might be biased.

Braindead said:
KP3 is not happening
Click to expand... 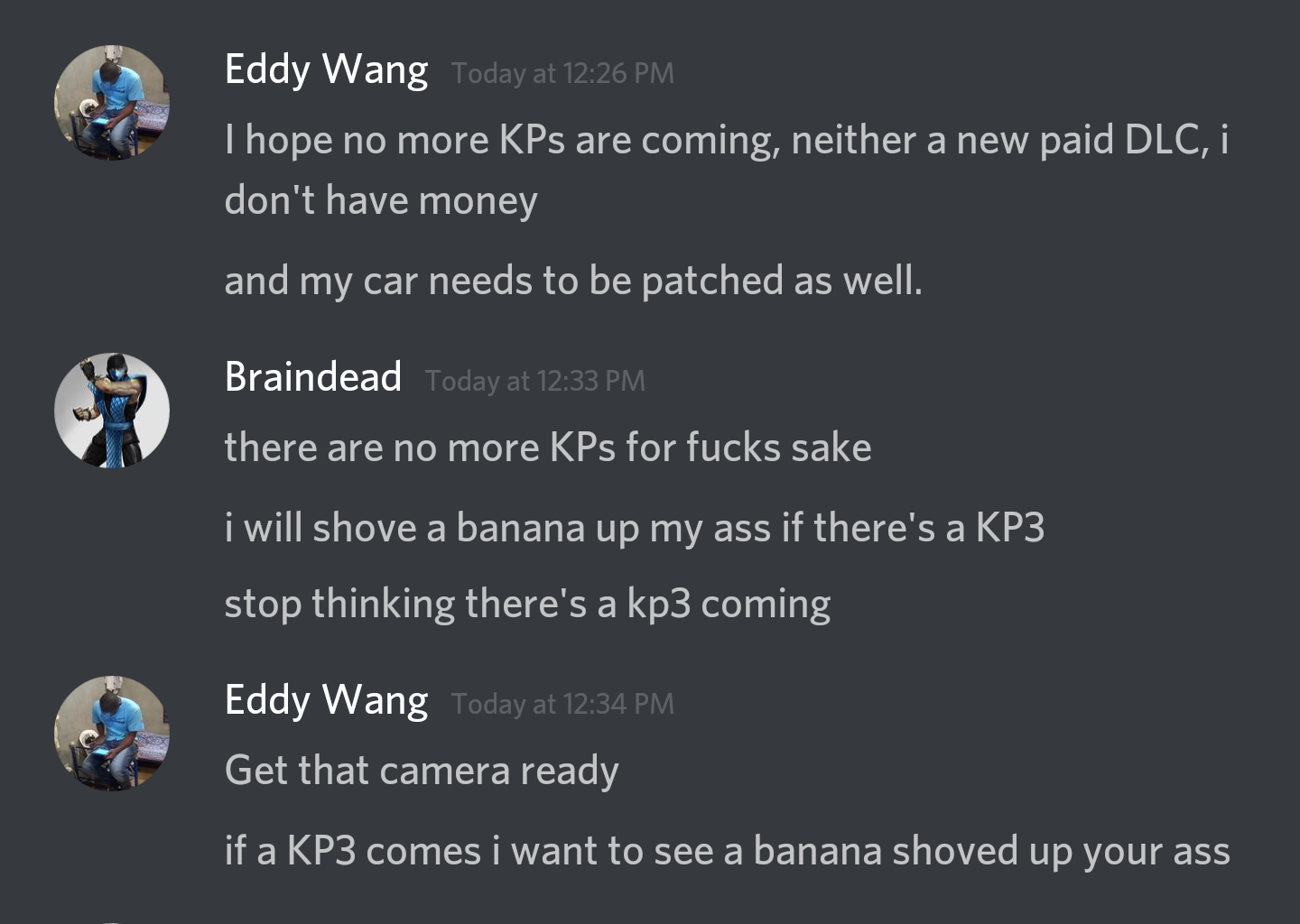 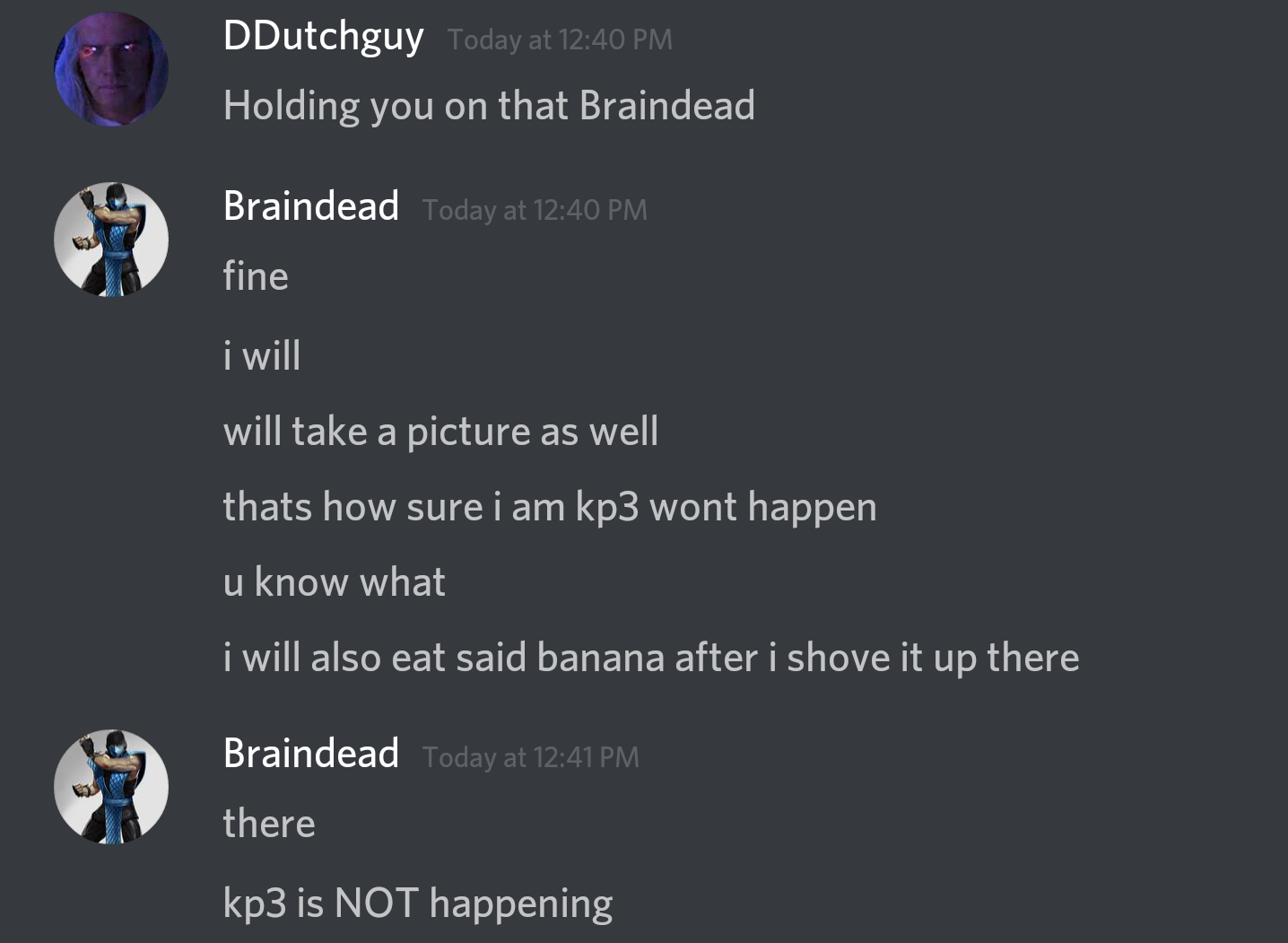 TYM gets to pick the size of the banana if it happens.

As big as possible of course.

Now I have a real reason to want a KP3

Toodrunk2combo said:
I wish kp3 was happening. I feel like Mkx is a great game, and I hope it has a long life. I also have no intention of playing injustice so I might be biased.
Click to expand...

Y'all sub an KOTAL players getting exposed in injustice 2

We need Shang, so we need KP3

Braindead said:
KP3 is not happening
Click to expand...

Thanks for sharing your opinion.

@Braindead
A man with no regrets.

I changed my mind after reading some of those comments. Gotta make a petition for KP3 right away. Make it happen Boon!

With that said TYM knows which planet is your favorite.

I want to see a reveal like this again

Premium Supporter
I too would like to see a grown man shove a banana up his own rectum.

DDutchguy said:
As big as possible of course.
Click to expand...

Maybe the last time alien is in that ass.

Hypnosis > Dreameater (its a reset)

It would be nice if NRS supported their games longer than 1 year. Im not asking for 8 years of SF4, but MK9 and INJ both got 1 year, and its looking like MKX might be getting a single patch after our 1 year mark. Its not enough. I think the game has enough depth to it to build from. Maybe it means a 6 month hunker down while they tweak things and the updates come at a slower rate, but i would love for this game to stay alive for awhile.

INJ 2 is getting a loot system, those kind of systems typically work better when intended to be more long term, so heres hoping that NRS is starting to take a few pages from Capcoms book and is willing to support their games for awhile
G

You're my fan if you can't stop shitposting me.

We need to stop thinking in last century terms about games and start to embrace the age of high speed internet where games receive patches for as long as there are people playing them.
I hope MKX will receive a good few patches and maybe even a few more characters not only to extend its lifespan but to keep things fresh.