Combo Breaker is finally done. 800 players entered and only 1 remained. With some big upsets going on throughout the pools, this was a fantastic start for the Mortal Kombat 11 Pro Circuit and the most energized the NRS scene has been in a LONG time.

Our top 8 going into things:

Who actually won and all that cool stuff for those who missed is below in the spoiler. If you want to catch it yourself, hit up Netherrealm's Twitch. Otherwise, I'll catch y'all later, this hype has tired me out.

After a late start following a Grand Finals bracket reset in Tekken 7, UltraAquaman finally got us going with Scar vs. F0xy. Our opening game was Scar's Sonya against F0xy's Cassie. F0xy took game 1 clean, his famous zoning keeping Scar out for most of the match. Game 2 was a near repeat of game 3, which force Scar into a swap to Scorpion. In a close game 3 that came down to a timeout, Scar saved his spot in Winner's and got a game on the board. He kept his renewed momentum going into the next set and took game 4 with Scorpion's throw brutality. The character swap proved to be the right decision, as Scar defeated F0xy 3-2.

Next up was Tweedy's Baraka playing Semiij's Kitana. Tweedy took the first point, Baraka's chop-chop special making quick work of Semiij's health bar in the final round. He just kept going straight through game 2, closing things out with a krushing blow into fatal blow punish combo. Semiij was able to put up a fight in the next game, but Tweedy closed it out, defeating Semiij 3-0.

Now over in Loser's, we were looking at Dragon vs. Big D with Big D pulling out a surprise Jade pick against Dragon's Cetrion. Dragon was not phased at all by Jade's anti-zoning abilities; after losing that first game, Big D decided to challenge him in the Cetrion mirror. It was looking better for Big D, but Dragon was still able to take game number 2. Game number 3 came down to another timeout, and Dragon sent Big D home, winning the set 3-0.

Closing out round 1 of the bracket was Deoxys against Sonic Fox. Sonic stuck to the character he won the Summit with (Jacqui) while Deoxys rocked it out with Geras. Deoxys came out swinging for game 1, but Sonic Fox did his Sonic Fox thing to close it out. A game 2 loss put Deoxys into a character crisis, but he decided to stick with Geras through the end. He regained some ground in game 3, but a 500+ damage combo from Sonic secured the game and the set 3-0.

Next game was Semiij playing Dragon in a battle of "ladies who use a lot of projectiles". In what might have been the most intense set so far, Semiij walked away victorious game 1. Dragon took the first round of game 2, but Semiij.exe kicked in to take the next two and the game. In a crazy close game 3, Dragon was finally able to get something on the board with a fatal blow sealing the deal. Dragon seemed to get things figured out and took another close game. It was settled in our second game 5 of the night, when Semiij defeated Dragon 3-2 and knocked him out of the bracket.

Following that was the battle of the foxes: F0xy's Kung Lao against Sonic's Erron Black. Sonic, showing us that cowboy hats top shaolin hats, took game 1. Not even worried about it, F0xy hit him right back with a game 2 win and followed it up with one in game 3 as well. Sonic looking a bit rattled decided to swap over to Jacqui for game 4. F0xy almost clinched it out, but he bet the game on a fatal blow that didn't work out for him. Game 5 resulted in a victory for Sonic, giving him the set 3-2 over A F0xy Grampa.

Back to winner's, Scar and Tweedy were up to decide who was getting the winner's seat for Grand Finals. The first game gave us some crazy reads by Scar, but Tweedy closed it out in the end with a well-spaced krushing blow round 3. Scar took game 2 clean, seemingly having an answer for everything Tweedy tried to get going. Game 3 was a repeat performance, but Tweedy finally got a handle on things at the start of game 4. However, Scar was just not going down and he secured his seat in Grand Finals 3-1 over Tweedy.

And to decide who would play him, we had Semiij vs. Sonic. Opening up with a Kitana vs. Erron Black battle, Semiij set the tone of things early with a pretty solid game 1 win. Sonic immediately swapped over to Jacqui after the loss, but Semiij held it together for a game 2 follow up win. In a move that surprised everyone, Sonic pulled out Skarlet for the first time in this top 8. The swap worked, Sonic took his first game. He followed that up with a raw fatal blow to win game 4. Finishing out the reverse 3-0, Sonic won one more game to defeat Semiij 3-2 and advance to loser's finals.

Now in loser's finals, Tweedy and Sonic played the runback from when Tweedy originally sent Sonic to the loser's side of the bracket. Opening up with Jacqui this time, Sonic took the first two games, looking for his redemption. Facing elimination, Tweedy swapped over to Geras for game 3. In a clean sweep, Sonic took the set 3-0 and advanced to loser's side Grand Finals.

In Grand Finals, former teammates Scar and Sonic Fox battled it out to determine the Combo Breaker 2019 Mortal Kombat 11 champion. Scar stuck it out with Sonya, the character who brought him here in a decisive fashion. Sonic went with Jacqui, the character who's been doing the most work for him this event. Scar set the pace early by taking a close round 1 and dominating round 2 for a game 1 win. Sonic proceeded to near double-flawless Scar for a game 2 win. Game 3 went a round apiece, and Sonic Fox emerged the winner, putting himself at set point. Scar returned the favor with a near flawless victory himself, placing himself at tournament point at the same time. With one more close game, Scar was able to take the next win, taking the set 3-2 and taking the title of Combo Breaker 2019 champion.

AMAZING play from Scar, especially those anti-airs. Combo Breaker a blast to watch as always.
It’s funny because Scar was saying before CB that:


https://twitter.com/i/web/status/1131654930304045056
Ft2’s did NOT phase this man. Didn’t lose a single set! Well played Scar!
This game looks great in tournament. All the haters and the “This game is gonna die competitively” people can take a backseat.

The true fans will acknowledge what kind of greatness we just saw. I’ve been seeing this build from MKX through Injustice 2, and I think that the level of competition in our scene is better than its ever been. MK11 captures it perfectly, and I think there are a bunch of exciting events to follow.

This is also certainly the most solid state one of our games has been in going into its first EVO.

Breaking 50,000 viewers was the icing on the cake.

Can’t wait for CEO. Let’s go!
God, I get anxiety just hopping into online ranked matches, and Scar's just sat there looking like he's a sculpture at a wax museum, lol. That level of calm is something I can only wish I could get.

MK11 is already off to such an amazing start. I can't WAIT to see the hype that will be Evo.
If anyone wants the full breakdown of the match orders and wins/losses, I've got it all here.
One of the best NRS tournaments I have ever seen. During day 1 and 2 i got a bit bored by a felt inflation of Sonja's and Geras, but look at the top 8, not a single character pairing repeated itself:

As of character usage, we saw 12 characters in the top 8, here is in how many matches they appeared. Very good, hope this variety remains over the course of the games lifecycle!

Yo can we give some huge props to Foxy for his Kung Lao?

He completely beat Sonic's Erron making him switch to jacqui, and if it was a ft2, he would have made history here!

For me, as a KL main, this was incredible to watch and LOTS to learn from.

This game as everything to be successful, nothing seems overboard and as long as defensive mechanics deliver to what their were meant to do, this game will keep on giving, i just wish i had more time to play currently, i'm feeling a little behind in some things, gladly this tournament has shown the way to go, specially F0xy and Scar with those throw combo punishes which where amazing
Great recap @HellblazerHawkman
Man I’ve been watching tourneys since mk11 came out and there was something truly special about this one..

Breath taking
Tweedy doing what he did was pretty hype, surprised he did so well. Shows hard work can get you far
Amazing gameplay by everyone. Some really amazing high level stuff. So far Sonic has lost to Scar twice and once to Tweedy in MK11. But the game is young.
Scar absolutely refused to use breakaway. I think he’s ahead of the meta. I’ve always kind of felt breaking away to have no defensive options on wakeup should be a last resort, but at the moment everyone uses it as soon as they get touched.

Brown Cow 54 said:
Scar absolutely refused to use breakaway. I think he’s ahead of the meta. I’ve always kind of felt breaking away to have no defensive options on wakeup should be a last resort, but at the moment everyone uses it as soon as they get touched.
Click to expand...

Yeah even the commentators were like "WHY IS HE NOT USING BREAKAWAY!" Then he won, so apparently he knows something most don't.

FoughtDragon01 said:
God, I get anxiety just hopping into online ranked matches, and Scar's just sat there looking like he's a sculpture at a wax museum, lol. That level of calm is something I can only wish I could get.

MK11 is already off to such an amazing start. I can't WAIT to see the hype that will be Evo.
Click to expand...

yep, that's the spirit, the attitude ! Scar was almost double flawlessed by SonicFox in the CB 2019 grand finals, and got to be concentrated and reverse the situation, recomponding himself and playing like a lion !

the dude (Scar) is a huge example of the 3d champion directives : desire , determination and discipline being taking serious !

Dumb question. What is FT2s?

nightcrawlers said:
Dumb question. What is FT2s?
Click to expand...

nightcrawlers said:
Dumb question. What is FT2s?
Click to expand... 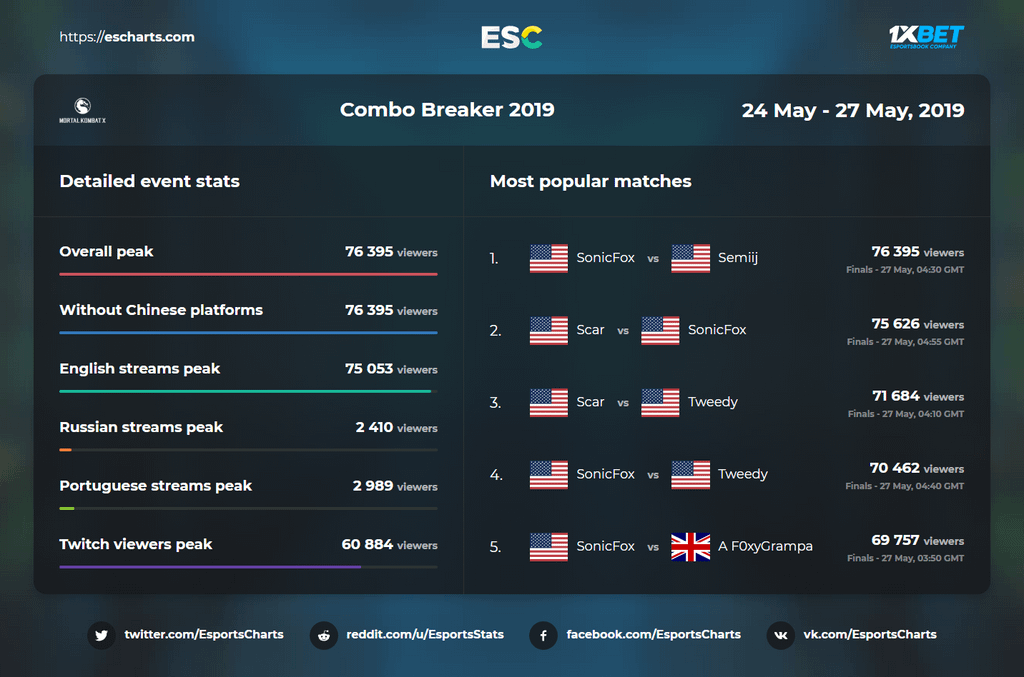 76k peak viewers at Combo Breaker 2019 not including youtube ect...
and SonicFox is apparently the man people want to see...
Are there overall win % by character somewhere?