Virgil Hawkins is just an average teenager, attending Ernest Hemingway High School, with a fetish for comic books and role-playing board games. His only problem was being ridiculed and bullied, mainly by his rival Francis Stone, also known as Biz-Money-B, later becoming Hotstreak.

After taking a beating from him, Larry Wade, a close friend, asks him to meet him at Paris Island, the most dangerous section of Dakota. Once there, Larry hands Virgil a gun in order to pay back Francis from earlier. But, he couldn't bring himself to do it, and with that, he tosses the gun into the water. There was one problem. Virgil was present at the Big Bang, a large brawl between rival gangs, but at the same time, the police arrived and unleashed a tear gas, spiked with chemicals to track any gang members that tried to slip away.

Things backfired, and the gas proved harmful. Out of over 500 gang members, only 10% of the people exposed to the gas survived, either mutating into monstrous creatures or gaining superhuman powers and abilities, and leaving the rest on their deathbed. When Virgil was exposed to the gas, he gained electromagnetic powers and unwillingly dismantles police robots with his powers before making his escape from Paris Island. Later he decides to become a superhero, naming himself Static.

Powers and Abilities
Super-Conductive Electromagnetism
Static has the metahuman ability to project, channel, generate, manipulate, and absorb raw electromagnetic energy, mainly being able to generate electricity from his body and fire powerful lightning bolts from his hands. He can generate electromagnetic shields from his body in order to protect himself from bullets, lasers, energy blasts, and other projectiles, and he can also generate repulsion fields that repel virtually anything. He can manipulate magnetic fields and magnetically lift metal objects, sometimes weighing many tons (anywhere from cars to helicopters). He can use his powers to magnetize and demagnetize objects; broadcast his voice over speakers nearby; charge objects with electricity to cause them to explode; reverse the polarity of nearly any object; and bend electrons to his will. He can also cover his fists with electromagnetic energy and employ this tactic in the use of melee attacks. Static has also has a trademark ability to generate electromagnetic energy to cling people and/or objects to surfaces, dubbing it a "Static-Cling." He can also use it to charge and levitate non-metal objects, but on some occasions, he has failed to. Static's maximum power level is unknown, but he has stated to be able to generate at least 20,000 volts of power and at one point has generated electromagnetic energy that was once immeasurable but powerful enough to destroy an abandoned building. Static uses a reinforced piece of steel to fly at up to speeds of 200 mph, controlling it via electromagnetic levitation.
Equipment
Static's most common item used in comics is a metallic disk he designed that allows him to fly using his powers. He's also capable of using the disk as a make shift weapon. After the company-wide reboot, Static sports a new Detachable Saucer, designed by Hardware that allows for both offensive and defensive actions, as well as video chat. Most recently, Static also wields a Detachable Bo-Staff for close quarters combat.
Intelligence
Static is an intelligent young man and does work with S.T.A.R labs, having designed parts of Red Robin's new suit in the New 52 and also making a mechanical dinosaur 'because he got distracted'. He also demonstrates interrogation skills, able to get intel on the Slate Gang from a fellow student in New York without threatening him.
Mental Powers
Static possesses some level of mind control resistance, having been able to willfully resist telepathic assaults of the Swarm, avoid telepathic detection from Miss Martian, and eventually resist the mental control of the Anti-Life equation. While in the Wyld's dimension Static could control different forms of energy in that dimension.
Healing Factor
Static has commented on having a Healing Factor when looking to see if his wounds from earlier in the morning were healed yet.
Weaknesses
Static's main weaknesses are insulators. His powers have little to no effect on them, as shown in his battle against Rubberband Man. Others would be wood (can be set on fire, but not electromagnetically manipulated or levitated) and anything that resists his power set. Water was an established weakness in the cartoon show, but he has never shown a weakness to water in the comic book series. Another weakness is his susceptibility to getting his power drained by an outside source.

I would take this version of static in injustice 2 any day of the week...either that or old man static from the time travel episode aka 2040 static as an alt outfit:

I hope NRS is scooping up these free ideas haha! Plus he was apart of the Justice League (Unlimited)!

IMO STATIC would be dope if he's done right.
He adds a unique powserset , youth and energy(so amazing intros, dialogue and alot of character), he has an establish fanbase(from the cartoon) and he's black (helps in diversity)
All pluses in my book.

Premium Supporter
Well he was added to the mobile game years ago. 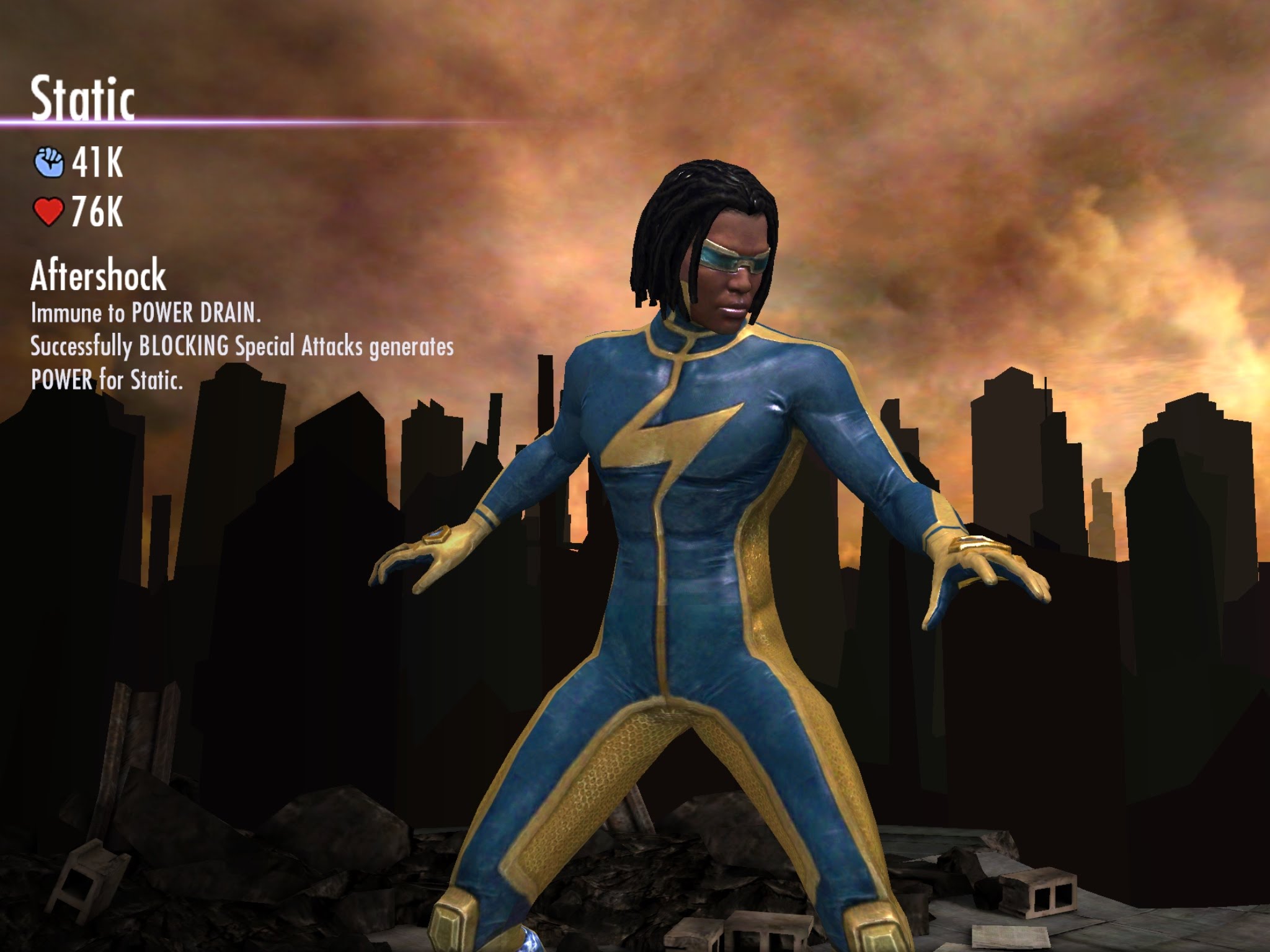 Well you know what they say. Be careful what you wish for.

Should Goro be top 5?

Rathalos said:
Maybe they will port him to Injustice mobile 2 lol
Click to expand...

Yea just copy and paste. No one will care. Seriously though, he deserves a spot in both games.

Premium Supporter
I like Adult Static from Future Shock the best, but it goes without saying that any Static DLC will do. From Boon's INJUSTICE 1 poll few years back. We got Beetle, Fate, Powergirl, and Swamp Thing so far for Injustice 2. I think Static's chances are looking good! 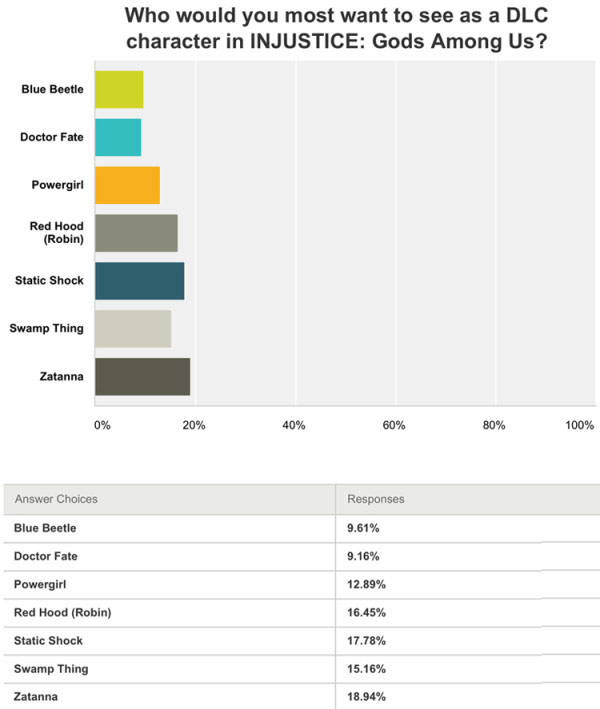 It's just his New 52 costume without the coat.

Static is definitely a far better choice than beast boy, terra, tim drake and other. Lame teen characters people have been asking for. Only problem is static being owned by milestone. DC/WB would rather promote Black lightning than Static.

HE BETTER MAKE IT IN THIS TIME

Ryu Hayabusa said:
Static is definitely a far better choice than beast boy, terra, tim drake and other. Lame teen characters people have been asking for. Only problem is static being owned by milestone. DC/WB would rather promote Black lightning than Static.
Click to expand...

Didn't Milestone get merged into the multiverse a little while ago? It's still under the DC imprint

I think it would be awesome to have an old man static skin too!

And please be in the main cast... lol

Ryu Hayabusa said:
Static is definitely a far better choice than beast boy, terra, tim drake and other. Lame teen characters people have been asking for. Only problem is static being owned by milestone. DC/WB would rather promote Black lightning than Static.
Click to expand...

DC got the rights to Static a couple years ago. They've also used him more than Black Lightning since getting the rights too.

He is the DC equivalent of Spiderman, and he was runner up next to Zatanna for the first game.

I don't think they own the full rights to him of the Milestone universe. If I recall correctly they have to pay royalties everytime they use him (same with Rocket and Icon).

I'd love to see him though!

Electromagnetism? His powers are similar to Raiden's.

Royal Contributor
I dunno we already gonna have cyborg, hard to have more than 1 black guy in a DC property.

I'm 90% sure he's DLC this time around they already teased him in the first watchtower live stream.

Booster Gold is in Injustice 2

He could have a Black Lightning AND a Black Vulcan Premium Skin.
T

As long as he's white, wears red and is named Shazam, I'm all for it.

Booster Gold is in Injustice 2

trufenix said:
As long as he's white, wears red and is named Shazam, I'm all for it.
Click to expand...

trufenix said:
As long as he's white, wears red and is named Shazam, I'm all for it.
Click to expand...